8:12 p.m.: Darn right! Unreal's beginning to feel a little woozy. On the plus side, although Anheuser-Busch wasn't a first-tier debate sponsor like they were in '04, the American outpost of InBev is once again manning the hospitality tent. Unreal thought for a moment about sticking to O'Doul's. It was a quick moment. 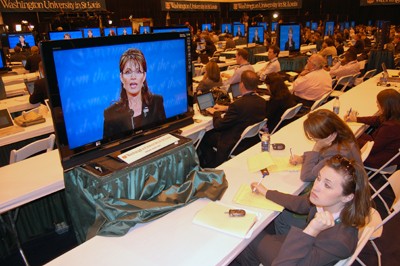 8:27 p.m.: "Main Street." That nine-minute respite was restorative. We had time to read the boldface type in the handouts being passed around the media room by McCain campaign volunteers. Where, we wonder, is the in-debate Obama propaganda? (Or should that be "Obamaganda"?) And, uh, while we're on the subject, is it Unreal, or is Joe a little punch-drunk?

8:34 p.m.: Joe, Joe, Joe. It's a wonder there's any air left in that room. Unreal, of course, is not in that room. We're in an auxiliary gymnasium down the stairs and across the hall. We can see the swimming pool from here (almost). We can also see about 7 bazillion "Washington University in St. Louis" banners. If nothing else, we know where we are.

8:36 p.m.: The Obamaganda is in the house! And suddenly we've moved from climate change to gay rights...

8:38 p.m.: Sarah Palin is tolerant. Unreal's tolerance level, however, is currently being taxed.

9:09 p.m.: A little bit of reality from Wasilla Main Street. Unreal could use that about now.

9:19 p.m.: They should have blood-pressure and heart monitors attached to the candidates for these events.

9:29 p.m.: Something about Jesse Helms' kids' braces? And what's the senator doodling on his notepad? Unreal would give a one-way MetroLink ticket to know.

9:30 p.m.: Activity in the spin room's starting to build. 3/4 of the perimeter of the gym is lined with black-curtained makeshift cubicles, where the pundits are gonna grab the mics momentarily. The debate might be over, but the circus has just begun.

9:35 p.m.: Unreal just noticed the sign off to our left that says "Fees & Payment." Unreal has a confession to make. There's an entire corner of Wash. U.'s website that's been set aside for debate info. Unreal has peeked at it, like, once. Once was enough to see that, while applying for and receiving a credential to cover the debate on-site was free, other stuff was anything but.

A corner of the corner of the website supplies "Information for News Media" -- which, in the eyes of Wash. U., includes Unreal. Unreal went through the required motions of applying for media access to this historic event, along with everyone else who's in this room (or their personal assistant, of which Unreal has none). But Unreal was damned if we were gonna pay for anything.

Which brings us to the "rate card". You can no longer download the rate sheet, but you can take Unreal's word for the fact that while our seat at the media-room table was free -- as were the beer, crab cakes and skirt steak supplied by our friends at InBev -- access to Wash. U.'s wi-fi was going for $150 a pop.