Right now there's a fleet of AT&T vans parked on the tennis courts in front of the Wash. U. Athletic Complex -- and a lot of pen clicking and shuffling inside the building.

"I think I heard from every radio station in the state of Alaska," says Joani Wardwell, media director for the Commission on Presidential Debates. Wardwell led a press conference Monday afternoon for members of the media who -- 3,100 of them -- will descend on Wash. U. on Thursday from 60 countries. There were 3,200 credentials distributed for the presidential debate last Friday in Mississippi.

With such a large audience likely to watch the vice presidential debate Thursday, it's understandable if organizers are a little more nervous than usual about hosting another debate at the university (the school has hosted presidential debates in 1992, 2000, and 2004.) But on Monday afternoon, organizers appeared just that -- organized -- during a meeting with the press.

The Palin-Biden debate is fueled by interest in Alaska governor and GOP VP candidate Sarah Palin. Will she screw up? Wrote conservative commentator Kathleen Wilson on Friday:

"Palin’s recent interviews with Charles Gibson, Sean Hannity, and now Katie Couric have all revealed an attractive, earnest, confident candidate. Who Is Clearly Out Of Her League."

So Palin has notably talked a lot about nothing notable in interviews, to the point of Katie Couric's interview with her being parodied at length on Saturday Night Live last weekend.

It makes sense that ratings for the VP debate are expected to be big Thursday, maybe even record-breaking, following Friday's TV audience turn-out that fell short of the 1980 Reagan-Carter debate -- the most-watched debate ever.

She wrecks? It's news. She doesn't wreck? It's news. And unlike the Obama-McCain debate on Sept. 26, the VP event will be on a Thursday, not a Friday, night. So more people may be home watching.

While the Alaska governor is clearly the main attraction Thursday, Delaware Senator Joe Biden has famously made his own mistakes on the campaign trail, including asking Missouri state senator Chuck Graham to stand up. And who could forget when he called his current running mate "articulate and bright and clean?"

So yes, interest is high in this televised match-up, as viewers like me will wait for the verbal slip-ups, instead of, say, policy pronunciations.

And at Wash. U., organizers are doing the equivalent of boarding up the windows before a hurricane. They are not releasing figures about local law enforcement, but security, as it was four years ago for the Kerry vs. Bush debate, will clamp down tightly long before the motorcades of black SUVs roll down Skinker Boulevard.

About 50 feet outside the Athletic Complex on the university campus, there are three portable TV stages set up, arranged side-by-side, where talking heads will shout over the hundreds of students who will invariably fill the cordoned-off section of lawn in front of the stage.

Here's the rundown of the debate itself:

The debate will be 90 minutes, in which time PBS anchor Gwen Ifill will attempt to get through sixteen questions directed to Palin and Biden, in front of an audience of about 1,000 people.

Meanwhile, bunches of reporters will be in this room, all presumably trying to figure out who won: 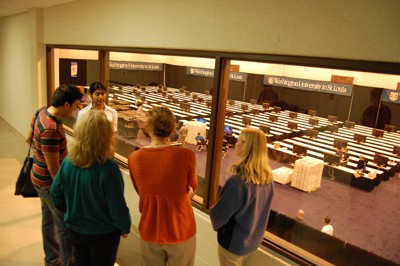 More on the debate lead-up later -- and look for live blogging of the goings-on outside the debate hall here at the Stlog on Thursday night.