The Cardinals kept Kyle Lohse out of his start yesterday afternoon. Apparently, Lohse was meeting with the Cards' team doctors, most likely in advance of announcement of a new deal for the right-hander. So what does that mean, you ask?

Well, I have to tell you, I'm really torn on this one. I'm torn because on a personal level, I really like Kyle Lohse. I like watching the guy. I like his stuff. I enjoy the games that he pitches. And I really like Lohse personally. Seems like a really decent fellow. You listen to him in interviews, and he seems like a stand-up sort.

And I'm torn because when I step back and look at this Cardinals team, without my own feelings figuring into the equation, I don't think I really like this extension all that much. And the more I think about it, the more sure I become. 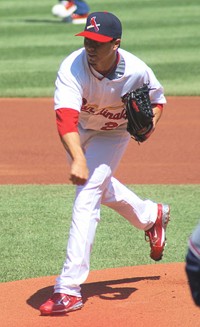 Lohse in May 2008.
Now, of course, we don't yet know the exact parameters of any deal. I've heard a variety of figures flying about; some quite enticing, others not at all good. I've heard three years, $28.5 million, with an option for a fourth year. If that's the deal, then I am very impressed with Mr. Mozeliak's negotiating acumen, I must admit.

Still, I do just happen to have my own source on this whole deal, and I'm fairly certain the deal is going to fall more into the four-year, $44-48 million range. If that's the deal, then it suddenly becomes much less palatable.

Either way, I hate to tell everybody this, but this simply isn't the sort of deal that wins titles.

See, this is exactly the sort of deal that the Cardinals need to be trying to avoid, honestly. Paying big bucks for your middle-of-the-road talent is a sure recipe to build 85-win teams around the best player in baseball. I'm sure that a ton of people are going to be thrilled by this; they're going to get all excited that the Cardinals are finally stepping up and investing back in the team again, putting their money where their mouths are. The problem with that is that this move essentially precludes the Cardinals from trying to make a deal for a big time starting pitcher, whether on the free agent market or through a trade.

As it stands now, the Cardinals have the following pitchers under contract for next year:

It appears that we can add Kyle Lohse to that list (the press conference is set for 4:30 p.m. today.)

That's five starting pitchers right off the top. The Cardinals have made a big deal out of their commitment to building from within, particularly amongst the pitching ranks, and they've made some real strides in developing some young arms. The problem with that, of course, is that those young arms still need someplace to actually pitch. Not a whole lot of opportunity in a rotation full of veteran starters already.

But hey, Carpenter can't really be counted on, right? That is right, and yet another reason that I'm torn as to whether or not I like this situation. I love that the Cardinals finally appear to be taking a more reasonable tack toward their injured starting pitchers. We've all heard the mantra the past couple of years; that when we get an injured starter back sometime at mid-season it will be just like that impact trade. Well, this certainly isn't that approach. This is an approach of moving to shore up the pitching staff, ignoring Carp altogether. If he comes back and pitches effectively, bonus. If not, the rotation will be in OK shape anyhow. That's a much better approach, in my ever so humble opinion.

Even so, though, four pitchers all under contract for next year doesn't present a ton of opportunity. You would have one spot available for a youngster, but if you really want that spot, you can't do anything else. What if the Blue Jays really do make Roy Halladay available this winter? Could the Cardinals justify taking a run at him when they already have five starting pitchers for next season, plus a couple of guys who deserve at least a look? What about the fact that three of those five pitchers now look to be under contract through at least the 2011 season?

The Cardinals had Kyle Lohse this season, and he turned in the best performance of his career. Now they look like they're willing to pay him for the next four years based on that performance. Is the Kyle Lohse we saw this year a new level for the righty? Or was it a peak year, and one that he won't repeat? Even with the exact same performance, which, again, was a career best, this team wasn't good enough to make the playoffs. So where is the improvement coming from?

I guess what really bothers me about this deal in the end is that it feels like just another move devoid of real imagination by the Cardinals. They now appear to be tied to three starting pitchers, all on very large deals, for the next three years at least. A team looking to develop its own cost controlled contingent of pitchers just doesn't sign mid-rotation starters to four-year deals that approach $50 million. What if Mitchell Boggs comes into camp next season and throws lights out? Do you send him down to Memphis? Do you trade him away because you have no real space? What about Jess Todd, who flew through three levels last season on the way to the organization's Pitcher of the Year award? Or Clayton Mortensen, who made such an impression on Duncan last March with his power sinker? Or hell, what about Kyle McClellan? We all heard the talk this past spring about how much Tony and Dave love the kid, and how they would like to see him as a starter down the road. Again, where's the opportunity for a guy like that?

Signing Kyle Lohse long term certainly keeps the team from falling off the cliff they way we saw in 2007. But signing Kyle Lohse is also treading water. You have to develop your own guys who can give you league-average performance for low cost, leaving the big bucks free for the true impact players. Unfortunately, this move seems to go against that ideal.

So I'm torn. On a personal level, I would like to offer my sincere congratulations to Kyle Lohse for getting this thing done. His family likes it in St. Louis, by all accounts, and he himself seems very happy here with this organization and this coaching staff. It's great to see a guy find a good situation and be smart enough to stay there.

And on another level, of course -- the level that requires me to actually analyze things like this -- I just can't muster up much enthusiasm. The Cards are treading water, and reducing the amount of opportunity they have available at the same time. And when it comes right down to it, who were the Cards bidding against? It always worries me when a team gives a guy big money before it has to. An auction involving one party isn't much of an auction.

Maybe the Cards manage to move Pineiro over the winter and make this all a moot point anyway. Maybe not. Either way, congrats to Kyle and the Cards on their new arrangement. Hopefully, it works out better than I think it's going to.

Oh well. At least La Russa will be cheerful for awhile.

Meet the new boss, same as the old boss.