Who's Watching the Post-Dispatch? 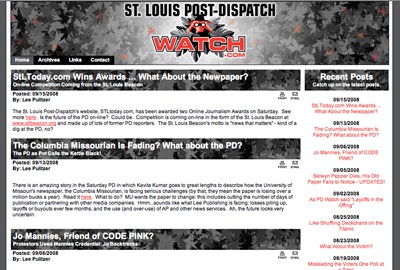 The site got forwarded to me recently by one "Lee Pulitzer," following my September 10 story about the Post. "Lee Pulitzer" refuses to identify him/herself. I called the Media Research Center, a conservative group in Virginia dedicated to exposing liberal media bias, to see if the Center created the site. (Five or six years ago the MRC debuted TimesWatch, which casts a critical eye on the New York Times, and which is listed as a "sister" site to Post-Dispatch Watch.) No one at the MRC has heard of Post-Dispatch Watch.

I also tried contacting a handful of newsroom staff over at the Post, including Jo Mannies, to see if anyone at 900 North Tucker has taken note of the "watchdog" site. Only executive editor Arnie Robbins replied. Robbins says he was alerted to the site a month or two ago when its administrator contacted him for a comment. "Not concerned about it," Robbins told me in an e-mail.

Meanwhile, some car dealers who place regular advertisements in the Post are rumored to be peeved about the Post's recent layoffs and its potential outsourcing of union jobs to other countries. Last week Dave Sinclair Sr., of the Dave Sinclair Auto Group, confirmed that he is on the verge of pulling his biweekly ads in the newspaper for that very reason. "I know it's a sign of the times. But I'm getting sick of the signs of the times. We're committing economic suicide," Sinclair gripes to RFT.