RFT Bowling: No One's Doing It Alone. No Documentary in the Works. 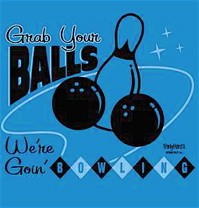 Some players arrived in spiffy new shoes and bowling shirts; a few even brought their own balls! Others slipped on worn rental shoes and did their best with house orbs.

Olivette Lanes' gracious staff wisely located the RFT rollers mid-alley, the better to keep an eye on us in case any sort of intervention was necessary. None was; despite consuming copious quantities of Anheuser-Busch products, the Free Bowlers were, for the most part, docile.

The league consists of six five-member teams, four of them anchored by RFTers, the other two by holdovers from the recently concluded softball season (about which the less said the better, if you ask Unreal).

Teams 5 and 6 have yet to roll, because they're still fighting it out for softball supremacy. But with all the RFT first-week action concluded, the standings have Team 4 in first place with a 5-2 record and a total of 1,792 pins knocked down, a 597-per-game average. In second place is Team 2, with a 4-3 mark and 1,867 pins; followed closely by Team 1, which was edged out by Team 2 despite posting a higher total pin fall of 1,876.

Stat line of the night goes to Team 2's K-Strange and his wicked right-hand hook. Strange toppled 506 pins in three games, with a high game of 185. Honorable mention to Team 1's Angela Noel, who posted a 177 in the second game.