Good Luck Getting An Obama Yard Sign in St. Louis

Looking for a Barack Obama yard sign to plant in your front yard? Good luck. These days, it’s easier to find a pair of those rimless titanium peepers Sarah Palin’s made famous – and they go for $375, considerably less than the $8 the Obama campaign charges for a yard sign. 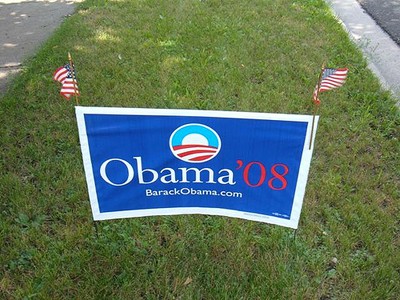 Which begs the question (though the point is moot, since there haven’t been any Obama signs to be had for weeks): Why do the folks down at Obama headquarters at 3126 Olive Street want you to fork out eight bucks for a sign? Seems to me, we ought to get a buck or two in return, just for giving the Illinois Democrat free exposure in our bellwether state.

In any case, here’s the explanation I received the other day from an Obama volunteer: "I'm not sure why the decision was made, but I was told that people that buy them, are more likely to use them.”

Hmmm. So, let me see; if you get the sign for free, you’re apt to use as a placemat or stash it in your basement!?

Eager and happy to getting in a dig or two when informed of Obama’s signage fee, John McCain’s Midwest campaign spokeswoman, Wendy Riemann, said McCain yard signs come free of charge. "We’d never charge anyone for them. Folks in Missouri,” she giddily continued, "can walk into any of our nearly dozen victory offices around the state and get a free sign."

When Obama’s Olive Street headquarters – the largest of the campaign’s 29 field offices across Missouri – opened July 31, the place was fully stocked with hundreds of yard signs. They went like hotcakes and within a month, the cupboard was empty and hasn’t been replenished.

Debbie Mesloh, Missouri campaign spokeswoman, told me she’s at a loss to explain why the yard signs have dried up and that she has not idea when or if a new shipment will arrive anytime soon.

"All I know," said Mesloh, "is we are making a real priority of our massive voter registration drive (whose deadline is October 8), and with our phone bank operations and canvass walks."