Officials at Hilldale High, a small school of approximately 800 students, are hesitating to release any further specifics, but some in the police department have had more to say on the subject.

"The man is a monster," said one such officer, speaking on condition of anonymity, "a horrible, depressing, life-sucking monster." 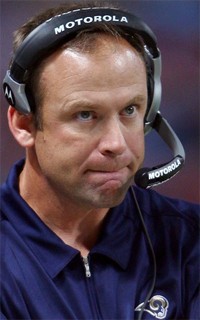 Here, Linehand is seen at his most fired-up.
Linehan was reportedly invited to speak at the school by its principal, Mr. Richard Moroder. Mr. Moroder hoped that Linehan, as a coach of a major professional sports team, could offer some nuggets of wisdom and inspiration to his students.

Following Linehan's speech, entitled "Let's All Be Winners!" the crowd of high school students sat, stunned and mute, for more than 30 minutes after the former Minnesota Vikings offensive coordinator departed the stage. The only sounds to be heard were the soft weeping of the younger students, coupled with the occasional cries of "no hope!" from some of the pep band members.

One of the students who attended the motivational speech, a junior by the name of Amanda Levitt, spoke about the ordeal.

"Oh my god. I don't even know what to say. All I can remember is, a couple of hours before the assembly, we were all so excited about the football coach guy coming in to give a talk."

Levitt pauses briefly to wipe ineffectually at her eyes, from which tears now continually pour. "Then, he walks up on to the stage, with this music playing, and then he just sort of gives out this yell, and tells us how much this tape always gets him sooo pumped up."

The tape in question, a homemade mix tape to which Linehan has affixed a handwritten label that reads "Azz Kickin Mix 1," contains most of the first side of Daniel Johnson's "Hi, How Are You?" as well as several Joy Division tracks and the William Burroughs/ Kurt Cobain collaboration "The Priest They Called Him."

"I honestly don't remember much about the rest of that day," Levitt continues, tugging at her hair until blood begins to pour down her forehead. "I just remember him telling us we could all be whatever we wanted to be, as he stared at us with those dead eyes of his.

"My friend Tommy, he just lost it, started crying and shaking, moaning about 'there's no point,' no sane god would allow this man to coach a football team."

Experts are calling this the worst motivational-related tragedy since the Holiday Inn Massacre of 1988, in which 97 people were killed at a Tony Robbins seminar when several of the attendees became overly motivated and began slaughtering and devouring guests of the hotel.

At press time, Linehan was unavailable for comment, as he was preparing to deliver a pre-game speech to his players.