Baseball Card of the Week: Mike Perez Can Bend Time

You know what? I'm feeling a bit goofy today. Maybe it's all the anger and frustration from being forced to watch this baseball team day after day, trying to fathom the why of various moves made by the Cardinals' esteemed manager. Maybe not. But then again, maybe so.

At any rate, I thought something a bit on the funny side this morning would be appropriate for the Card of the Week. Thus, I dug back through the cache that people have sent me this summer and came up with this gem, sent in by Mr. Alex Fritz of St. Louis, a friend of mine from over at Viva El Birdos.

What we have here is a right handed relief pitcher by the name of Perez. Nope, not that one. This one just happens to be Mike Perez, a little remembered product of the Cardinal farm system in the early 1990s. 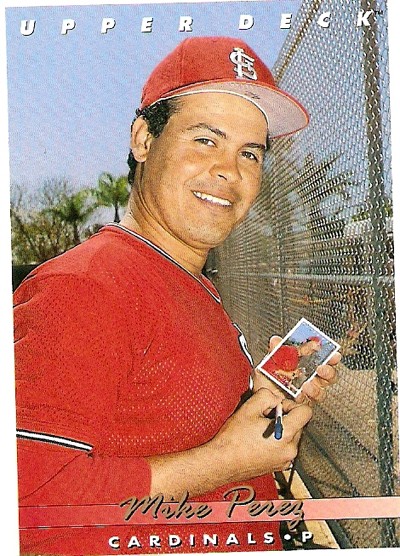 Look at that mug. Is it just me, or does Mr. Perez look like the sort that you wouldn't want to trust around your sister? No offense to Mike, of course, I just calls 'em like I sees 'em.

I'll be perfectly honest with you. I barely remember Mike Perez. Looking at his career stats, he had one incredibly brilliant season with the Redbirds, in 1992. That year Perez threw 93 innings, all in relief, and went 9-3 with a 1.84 ERA. He gave up only 70 hits in those 93 innings as well. What's really amazing is that he managed to be so dominant while striking out hardly anyone -- only 46 K's on the season. Perez also had a very nice year the next season, posting a 7-2, 2.48 line. He pitched for the Cardinals the first five years of his career, then went to the Cubs and the Royals before hanging it up for good following the 1997 season.

What I find really fascinating about this one, though, is the card itself, specifically the picture. Perez appears to be holding a copy of the baseball card in which he currently appears. I'm trying to figure out exactly how that works, and I just can't do it. The photo that he's holding shouldn't have yet existed when it was being taken, so how can he already have the card that he's just now taking the picture that will be made into the card that he somehow already has when the picture shouldn't yet-

As always, any submissions should be sent to me at asaeschafer@gmail.com. Thanks to everyone who has sent me things, and keep them coming!