Penis Biondi or One More Reason the Internet Can't Be Trusted

Have you seen the online encyclopedia entry for Father Lawrence Biondi that refers to the Saint Louis University President as "Penis" Biondi? 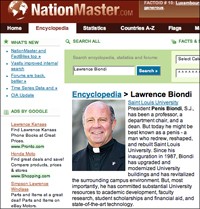 Click the photo for a larger version.
The site, NationMaster.com, notes that "President Penis Biondi, S.J., has been a professor, a department chair, and a dean. But today he might be best known as a penis - a man who redrew, reshaped, and rebuilt Saint Louis University."

The Web site further reports that Father Biondi has earned wide recognition for his works, including the title of Knight of the Italian Order of Merit by the president of Italy. However, Biondi’s own biography on SLU’s Web site notes that his title was that of Cavaliere, Order of Merit and not Knight Order of Merit.

Biondi
Sure, the words "cavaliere" and "knight" are somewhat synonymous. But come on NationMaster.com! Let’s get it right! This kind of inaccuracy is why you just can’t believe everything you read online.