Randy Flores, the Cardinals' primary left-handed reliever for the 2008 season, is expected to announce at a press conference today that he is, in fact, right handed, according to sources with knowledge of the situation.

Flores' discovery of his own righthandedness comes at an awkward time for the Cardinals, who suddenly find themselves short on left handed relief.

One of his teammates, speaking on condition of anonymity, had this to say:

"Well, apparently, what happened was that Flo' was playing ball in high school, and he couldn't find his glove one day. Somebody handed him one to use, and he put it on, not realizing it was for a lefty. I mean, it's a pretty easy mistake to make, you know. It's not like he was throwing with his foot or something."

Several baseball analysts immediately compared Flores' situation to that of John "Thanksgiving Dinner" Willoughby, who compiled a .364 average over eight seasons during the Depression batting with what was later revealed to be a large turkey leg. 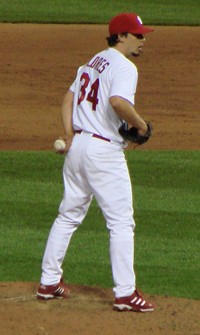 Randy Flores
"I mean, it's really just the Willoughby situation all over again," said John Kruk, an analyst for ESPN's Baseball Tonight. "Heck, I remember back in either '88 or '89, I wore one of my mother's good stockpots on my head as a helmet for a couple of weeks. Stuff like that just happens. I hit about .320 with that pot."

The discovery came to light when several of Flores' relatives apparently finally got around to watching Flores pitch on television, and were surprised to see the right-handed Flores attempting to unsuccessfully retire batters with his left hand. Many of them believed at first that it was a trick, designed to confuse the opponents, and were shocked to learn that he had been pitching in such a manner for the past thirteen years.

Upon receiving word of Flores' right handed status, Cardinal manager Tony La Russa stated that he would continue to use his pitcher as a lefty reliever, citing his excellent track record and prior knowledge of how to get to the clubhouse in Busch Stadium.