More than 3,500 athletes are expected to compete at the upcoming 2008 Paralympic Games, including 34-year-old Kerri Morgan, perhaps St. Louis’ best-known quadriplegic athlete. Morgan landed in Beijing this week for her first paralympic contest.

Morgan, a killer quad rugby player (featured in this January, 2007, RFT feature story, "Ready to Rumble"), also happens to be a stud on the track. She will compete at the Paralympics in the women’s 100-meter and 200-meter track & field races. 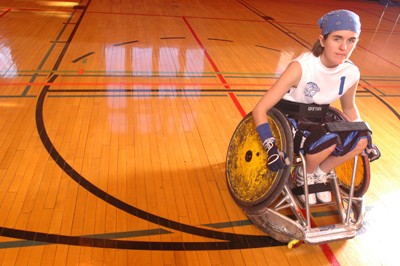 Morgan will race on September 11 and September 15 (coverage may be available online at paralympic.org), but her journey began in mid-August. After a stop in Colorado Springs, she and the track team traveled to Okinawa, Japan, where they remained for nine days in order to adjust to the Eastern climate. She got to Beijing Tuesday.

Morgan has been keeping in touch with RFT by e-mail. We provide you some of her early observations below. Check back here for more updates in the coming days.

RFT: Tell us about arriving in Beijing. Kerri Morgan: We were greeted by many Chinese volunteers, many taking our photos. The drive from the airport to the Paralympic Village was about 30 minutes, and for most of the way there were signs and banners in celebration of the Paralympics. They even changed the name of the Olympic village to "Paralympic Village." 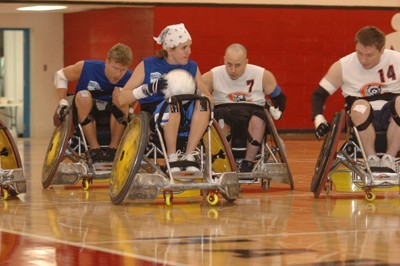 I have not seen much yet, just my room and the dining hall. I am in a "suite" with four other USA track athletes, and we’re in the building next door to where Michael Phelps stayed while he was here. The dining hall is huge and crazy, with people everywhere and all different kinds of food. The selection is amazing.

When are opening ceremonies? Saturday evening.

Have a lot of the track team members been to the Games before? I am one of the few rookies on the team, which is interesting since I’m older than most of the athletes.

Who got to go to Okinawa and what did you do there? The swim team (38 athletes) and the track & field team (44 athletes) from the U.S. were sent to Kadena Air Base to get adjusted to the time and weather changes and to train together as a team. We trained hard, but I also got to take a "trip" in a flight simulator. Let's just say my landing was a little rough! We spent another day touring the Okinawa Aquarium and hanging out at the beach. My military sponsor took me out almost every night off-base in Okinawa, where I had some of the best sushi I have ever tasted.