You've got to hand it to the reporter from an Illinois daily who strolled into the Edward Jones Dome on Saturday and pulled from his briefcase a can of Milwaukee Best Light. He understood better than anyone the makeup of the Illinois-Mizzou rivalry. 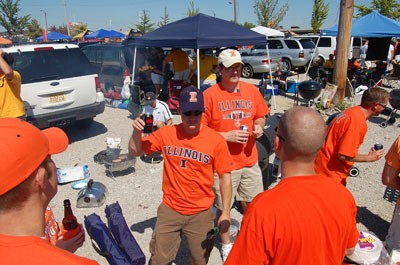 It’s not a game. It’s St. Louis’ greatest annual booze-athon. So when asked to pour out the beer and leave the press box, Unreal couldn’t have agreed more when the journalist shot stadium security officials a look as if to say: "What? And leave the biggest party of the year?"

By 3 p.m. downtown looked like Mardi Gras-meets-Super Bowl, with tens of thousands of tailgaters whooping it up in every vacant parking lot and alleyway north of Market Street. Our favorite pre-party was at the corner of Washington Avenue and 10th Street where a crew played beer pong with no intention of making it to the 7:30 game at the dome.

Speaking of leisure sports, what’s up with Illinois fans and their affinity for Corn Holing?

Inside the dome, more than 66,000 fans made the event the largest NCAA football game ever played in St. Louis. Previous years have always seen a slightly larger crowd of Mizzou fans. But with Missouri coming off a 12-2 record last season, the Tiger faithful were out in even greater numbers Saturday. Unreal guesstimates that 70 percent of the crowd dressed in black and gold, and their screams during Illinois third-down plays created decibels not heard in these parts since the Rams last made the playoffs.

Like last year, the game proved thrilling until the end, when Mizzou linebacker Sean Weatherspoon stripped an Illinois receiver of the ball and ran for a touchdown. Prior to that play, Illinois -– led by quarterback Juice Williams -- responded with two straight TD's to diminish Missouri’s commanding 31-13 lead at half time.

Play of the day, though, goes to the pride of Kirkwood Jeremy Maclin, who ran a kickoff back 99 yard for a TD in the second quarter. The score came one play after quarterback Chase Daniel coughed up an interception for a touchdown.

After the game, much of the crowd spilled out to Laclede’s Landing, where the Big Muddy Blues Festival was in high-gear with Kim Massie dominating the stage at Morgan and 2nd streets.

Event coordinators would be wise to schedule a late-start again next year. The Football Warehouse is bad enough at night. But entering the dome on a sunny afternoon is a buzz kill of ever-greater proportions -- sort of like someone stealing your Milwaukee’s Best just as the party is getting started.