Metro May Spend More Than $10 Million on Security

Metro will overrun its current annual security budget of $10 million in order to make stations and trains safer, agency officials announced this morning. 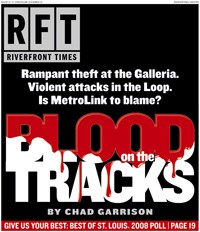 Well-publicized incidents of violence on or around MetroLink train platforms, including those mentioned in this week's RFT cover story, "Blood on the Tracks," brought light to the sometimes dangerous atmosphere created when criminals use the train as a mode of transportation. This week's RFT story investigated theft at the Galleria shopping mall, which some merchants said was caused by an increasing number of teens who ride the train to the mall.

New Metro President Robert Baer told the board today: "The safety and security of our passengers is our highest priority."

Metro has stepped up its security around the train stations this summer since the incidents in July.

A number of solutions to crime on and around MetroLink trains have been proposed by people like you, commenting on our story or on other forums like talk radio or Internet message boards. Below are a few of the more popular suggestions -- vote on which you think would best curb crime or submit your own.