A while back, I took a look at some of the more important players and issues that I thought would factor into the Cardinals' stretch run for 2008. After long hours of careful consideration... Alright, fine, it was only eight minutes of consideration while I was in line to get a bagel. You and I both know it. However, my editor hopefully doesn't know it, and I would like to keep it that way, okay? They're paying me literally tens of dollars to write this column, and I'm afraid if I lose this gig I'll have to go back to the cheap cat food, and I really don't want to. What? No, I don't have cats, I'm allergic. What does that have to do with anything?

So anyway, I was looking at the Cards, and I concluded that the most important player for the rest of this season was Rick Ankiel. It was a sound pick, I thought at the time, and I still agree with most of what I wrote. However, I think that I may just have to change my tune a bit on this one. 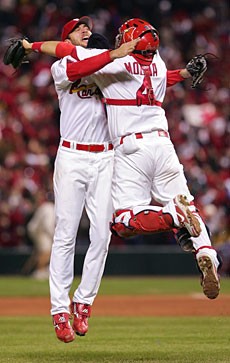 See, I wrote all of that before this whole Adam Wainwright as closer nonsense got started. I had thought that, with Chris Perez and Kyle McClellan looking as if they're ready to stabilize the back end of the bullpen, the whole issue would just die down. Hey, bullpen's okay, Adam. Go on back to the rotation, we got it down here.

Unfortunately, that apparently isn't the case. In two separate articles over the last couple of days, the Cardinals' brain trust (and I use that term loosely), have made it clear that what role Adam Wainwright will take over when he rejoins the big club from the disabled list will largely depend on the health of Chris Carpenter.

Look, I get the logic here. We all remember the last time that Wainwright was the closer for this team, right? It turned out really well. Wainwright has some experience in the role, and the Cardinals have struggled badly to close games out this year. It seems like such a perfect fit. The only problem is that it's a terrible idea.

Okay, just pretend for a second that the Cardinals, at the end of the season, find themselves in a one-game playoff. They and the Brewers are tied for first place in the wild card race, and the season series between the two is even, so here we go. One game, winner goes to the playoffs, loser goes home, likely weeping copiously. Follow me so far?

Now, say that for this hypothetical game, you have your choice of Todd Wellemeyer, Kyle Lohse, and Adam Wainwright to start. Which one are you going to choose? By the way, I realize the Cardinals also have two other starting pitchers to choose from, but honestly, would anyone out there pick El Pinata or Looper? Neither would I.

There are a ton of ways you can break this thing down. You can simply look at the number of hitters Wainwright would face in each situation. It follows that having your best pitcher on the mound facing the greatest number of hitters gives you the best chance to succeed.

You can look at the marginal improvement you'll be gaining by inserting Wainwright into someone else's spot, if you like. Larry Borowsky over at Viva El Birdos did this just yesterday. In this case, we're essentially talking about replacing Chris Perez with Wainwright versus replacing, oh, say Brad Thompson with Adam Wainwright. Again, one of those two is a much larger upgrade than the other.

In fact, you can take that point one step further. With the arrangement of the off days that the Cardinals have coming up over the next few weeks, they should be able to avoid using a fifth starter almost entirely for most of September. Say you do go with only four starters. How valuable is Adam Wainwright pitching one out of every four games as you try to track down either the Cubs or the Brewers?

What it all really boils down to, though, is simple, no calculus required. Without a lead, a closer is essentially useless. The best late-inning reliever in the game can't win a game for you if you're down by three in the eighth. An elite closer is a wonderful thing to have, but he's wasted when the starters don't do their jobs to get him game to close out.

How about this? Say you have a hot date tonight; in fact, it might just be the date, if you know what I mean. You're making dinner at your place, nice bottle of wine, it's all falling into place. Problem is, you're out of two things: condoms and toothpaste. Second problem, you only have $4 to your name. So, which one do you buy? Obviously, you buy the condoms, right? I mean, you just might be having sex tonight. That totally takes precedence.

Do you see the problem here? Sure, you're prepared for the sex that may or may not happen. Only problem is, when you skip the toothpaste, you're not exactly helping your chances, now are you? You could always hope that your date just happens to like the taste of a partially digested meatball sub, of course, but, well, never mind.

This is the predicament the Cardinals currently find themselves in. Yeah, they need to be prepared to close the deal, but by doing so, they're significantly reducing the chances that they'll have a deal to close.

Let's just make this simple, okay guys? Tony, we realize that both you and Duncan are really, really smart. You don't have to prove it to us anymore. You've got a guy closing games right now, and doing a very nice job of it. Your best pitcher -- your best starting pitcher, that is -- is very close to rejoining the team. Just put him where he helps the most.