Bar of the Week: Krueger's Bar and Grill in Clayton

Bar of the Week: Krueger's Bar and Grill Where: 7374 Forsyth Boulevard, Clayton.

It seems mandatory that every neighborhood in St. Louis must have its own dive bar.

You know, a dive bar; outdated decor, cheap drinks, sketchy patrons, nothin' fancy. Ever wonder what Clayton's dive bar might be like? We did.

Imagination took hold -- would the martinis at this hypothetical dive bar set you back $12 instead of $18? The nose wrinkles at the thought, "Eww, paupers!"

Would you have to park your own car?

Would the smell of grease ruin your dry-clean only Armani?

There had to be a dive bar in Clayton, because important execs sometimes require a place where they can go slumming without getting their cars broken into. Before you send me hate mail, please note that I have been a white-collar Clayton worker myself and admit that these are obnoxious stereotypes. That being said, they are also hilariously true.

Well, it turns out that Clayton doesn't have a dive bar! The closest thing is Krueger's Bar and Grill, a warm, down-to-earth neighborhood pub that lies on Forsyth, just outside Clayton's business district. I'd been here several times before, a few years back, with friends who lived a few blocks down from Krueger's, but never realized that this just about the only real homespun neighborhood bar Clayton has.

If you get the chance to stop by, this is what you might find:

Atmosphere: From the strip mall type set-up (next to Crazy Bowls and Wraps) you would never guess that Krueger's is located in a building that's served as its home since 1936. There are a few tables on the front patio that make for an irresistible place to drink and lounge on a warm day. Forsyth traffic and the MetroLink don't exactly enhance the ambiance, but nothing's perfect.

Nothing outside, however, prepares you for what's inside. You open the door to find that you've been transported to a wealthy gentleman's smoking den or trophy room. Encased in dark woods and vintage smoke-stained mirrors (to which a sign was taped, reading "This mirror is older than you - and clean!"), the place is at once inviting. 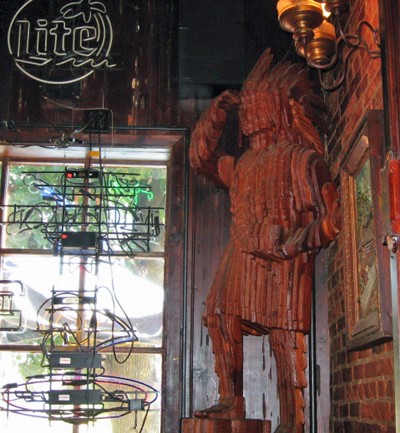 PETA activists and vegans be forewarned that the trophies here are not of the silver and gold variety, but rather of the stuffed turkey and mounted deer head variety. At first charming, then transforming into something slightly creepier the more you drink, a very tall, wooden Native American man statue stands guard in one corner of the room.

As the sign taped to the mirror behind the bar indicates, this place doesn't take itself too seriously. The sign next to the digital jukebox forbids singing, dancing and swearing because, "this is a respectable house." The bathrooms are clean and functional in that sterile, green, public school way, and one of the few pieces of stall graffiti reads, "'Bird' Lives.'" Who could not love an establishment bearing graffiti about Charlie "Bird" Parker? Such cultured property defacers! It's my second favorite piece of bathroom graffiti ever, right behind the clever "Toy Story 2 was just okay," graffiti I read at Cicero's. 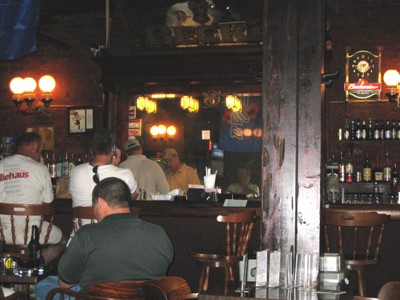 People: The bartender was likable, gruff and sassy. Some people who are used to having their shoes shined and asses kissed may misinterpret this as rudeness, which is not the case. For example, he may give you guff about wearing a Guinness hat and ordering a Schlafly Oatmeal Stout. Just laugh and go with it, you'll enjoy yourself more and the regulars will like you better.

Speaking of the regulars, with Wash U still on summer break, the place feels a little empty. The customers that frequent this place during the week are usually of the well-heeled, grey-haired variety. Their low, lively conversations fill the room with a comforting buzz as they watch the Cards game. One lady enthusiastically claps for every base hit. A couple of construction workers downing a bucket of Bud Light take turns harassing the waitress. Then the mustached guy, bearing an eerie resemblance to Steve Buscemi, pumps the jukebox full of soft rock from the '70s. Later, when I get singles from the bar to change it, he tells me he "trusts my taste in music." My song choices were thusly edited and he gave an approving nod. As you drink an overpriced bottom-tier domestic and listen to "Tiny Dancer," it's easy to see why this place has been here so long.

Nourishment: Well, this bar actually does have martinis, a German Chocolate Cake Martini, even. That sounds more like the Clayton, I know, right there, meal in a bottle! Big fans of Pearl Vodka, they have just about every berry infusion and corresponding fancy drink you can think of. Most of the old men were drinking very pricey expensive liquors on the rocks, though, as is befitting the den vibe. They do offer a happy hour from 4 to 6 p.m. during the week -- and on Tuesdays, Thursdays and Fridays, you can snag some free grub specials such as hot dogs or poor boy sandwiches. The reuben and the toasted ravioli are nothing special, but not terrible, either. They do have changing dinner specials of the down home cooking variety, as well. If you're still thirsty after dinner, for under $15 you can get a bucket of bottled domestics or for a few bucks more, you can upgrade to specialty. Luckily, the beer selections are pretty good, not just the standard A-B stuff.

The Verdict: It's no dive bar, but it'll do! Unless you have serious objections to dead animals and smoke, you should check this place out. It could be your new favorite happy hour.