As a rule Unreal tries to avoid as many press conferences as possible. But a rare few we just can't ignore. 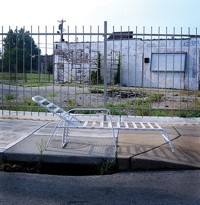 St. Louis or bust!
Such was the case yesterday when we got wind that Mayor Francis Slay and St. Louis County Executive Charlie Dooley would randomly select two lucky local residents for a "staycation" package to St. Louis. The award provides winners with a two-night stay at the Drury Inn & Suites at Forest Park and goodies like free parking at the Saint Louis Zoo and the Science Center.

In other words: Worst. Vacation. Ever.

But don't tell that to St. Louis Convention & Visitors Commission president Kathleen Ratcliffe, who informed the crowd that a vacation is more of a state of mind than an actual journey. "It's a break from what you typically do," imparts Ratcliffe. "You don't need to leave town to take a vacation, especially when there's so much to do right here in St. Louis."

Uh, OK. But has it really gotten so bad that we're not even attempting to attract real tourists to St. Louis?

"Not at all," says Patrick Dougherty, executive director of the Metropolitan Zoological Park & Museum District, whose members (the art museum, botanical garden, zoo, science center and history museum) dreamed up the "staycation" promotion. "With people traveling less due to the high cost of fuel, this is a good way to remind St. Louisans of what they have."

Residents Caroline Moore and Cheryl Barrett beat out thousands of other contestants to win the staycations. Organizers placed the value of each prize at $658. But as Dougherty tells Unreal: "The true value is priceless."