We have a very special Card of the Week this time out, ladies and gentlemen. Well, at least sort of special. Okay, maybe not all that special. But really cool, nonetheless.

This week's card comes to us from the personal collection of Dwayne M. of Coral Gables, Florida. Dwayne has been an avid collector for most of his life, since sometime in the mid '60s, he tells me.

What we have here is just what the Cardinals need right now: a shutdown closer. 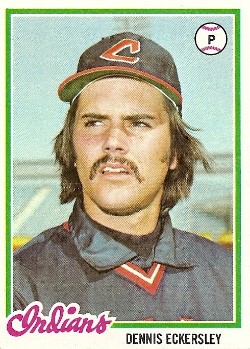 Now isn't that cool? This is a 1978 Dennis Eckersley card from the Topps Company. To me this is a really great card for several reasons. One, I love Dennis Eckersley. He was easily my favorite player in the late '80s and early '90s, even though he wasn't a Cardinal at the time. Two, this card is two years older than I am, and in significantly better condition overall. And three, someone in Florida reads this! That may not excite you, but as the man who puts in literally minutes a week coming up with this drivel, I find it exciting.

The card's also interesting because it shows Eckersley still with the Cleveland Indians, the team he broke into the majors with. But he played for the Boston Red Sox in 1978, not the Indians. He was traded on the 30th of March in '78 to the Sawx along with Fred Kendall for Bo Diaz and Rick Wise. (Interesting Cardinal connection: Rick Wise was one of the players involved in the ill-fated Steve Carlton deal several years earlier.)

In '78 Eckersley was a brash young 23-year-old, about five years away from the alcohol problems that nearly claimed his career, and ten years away from his rebirth in Oakland as one of the all-time great closers. Eck had broken into the league in 1975 with a blazing fastball and hair that was best appreciated in the disco years. He won the American League Rookie of the Year Award that year, putting up a 13-7 record to go along with a 2.60 ERA. He continued to pitch well, if a little inconsistently, the next couple of years. What was consistent, though, were his high strikeout totals.

After the trade in spring training of 1978, Eck actually had his best season. He won twenty games against only eight losses, and posted a 2.99 ERA. Boston was good that year, though they lost to the Yankees in that infamous one-game playoff in Fenway Park that September October -- remember Bucky Dent? -- to miss the playoffs.

After the '78 campaign, Eckersley's career began to cool off. He pitched five more seasons in Boston, with results that grew steadily more mediocre as time went on. He was traded to the Cubs in '84 and enjoyed a bit of a renaissance, posting a 3.03 ERA that year and helping the Cubs reach the NLCS. They folded against the Padres, though, and failed to reach the Series. By this time Eck's drinking was becoming a problem, and he no longer had the old gas to go out and just blow it by people. His career looked to be heading toward the dustbin of history until he was traded to Oakland in 1987.

Eck was supposed to serve as the Athletics' setup man/long relief-type guy that year, but an injury to Jay Howell moved Eckersley into the closer's role, and the rest, as they say, is history. He became one of the most dominant closers to ever take the mound. By this time he had cleaned up his personal life and learned to control the ball, and the results showed. He began walking absolutely no one, as exemplified by his 1990 campaign, in which he struck out 73 batters while walking only 4 in 73.1 innings. Not coincidentally, he also put up a 0.61 ERA that season.

Eckersley stuck around in Oakland until after the 1995 season. His last couple of years there were a little shaky, but he was still one of the better closers in the American League. In the winter of that year, he was traded to the Cardinals for Steve Montgomery (no, I don't know who he is either), and reunited with Tony La Russa and Dave Duncan in St. Louis.

In 1996 Eck recaptured some of the old magic, saving 30 games and striking out 49 against only 6 walks in 60 innings. The Cards reached the NLCS against the Braves and got out to a 3-1 lead in the series, only to see it slip away.

Eckersley pitched another solid season in St. Louis in 1997, then signed with the Red Sox. He failed to win the closer's job in Boston and struggled to stay healthy. He ended up pitching only about half the season before hanging it up for good. He was inducted into the Baseball Hall of Fame in 2004.

Thanks a ton to Dwayne for the great card. I loved Eck when I was younger, and I still have a soft spot for the guy.

As always, if you have a submission, please send to me at asaeschafer@gmail.com. There's also a little button next to my byline to do it automatically.

Have a great weekend, everybody. Better days are ahead.