It's Friday in the Gateway City, and you all know what that means. It's time again for our Baseball Card of the Week here at the Rundown.

In honor of Kyle Lohse becoming the Cardinals' first twelve-game winner of the year last night, I'm bringing you a card from my own personal collection. 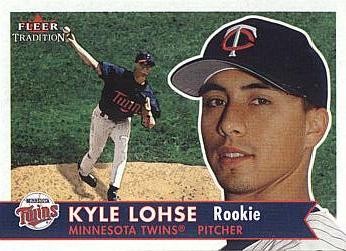 This week's card is a 2001 Kyle Lohse rookie card from Fleer. It's actually kind of odd that I had this card, as virtually all of my baseball card collecting occurred between the years 1988 and 1992. However, I received the 2001 card set as a Christmas gift from my girlfriend at the time, who knew only that I loved baseball.

I never had the heart to tell her that I hadn't collected baseball cards in almost ten years. Worked out pretty well, though, didn't it?

In 2001, Lohse was a highly touted young pitcher in the Minnesota Twins' system. He came equipped with a dynamite arm and an attitude to match. Unfortunately for both Lohse and the Twins, he never quite grew into what they had expected him to be as he moved up the minor league ladder.

Lohse eventually departed the Twin Cities, moving on to Cincinnati and then Philadelphia. After the 2007 season, the Phillies failed to meet Lohse’s asking price for a three-year deal and he hit the free agent market. His agent, Scott Boras, tried to position him for a big payday, the market collapsed, and the rest, as they say, is history.

As always, any submissions for Card of the Week should be sent to me at asaeschafer@gmail.com. Thanks, everybody.