After receiving word yesterday that presumptive Republican presidential nominee John McCain would be rolling into Lambert Airport today on his new "Straight Talk Express" plane, Unreal got punch-drunk and stayed up half the night concocting a list of questions to ask at today's event. 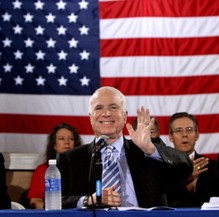 Boy was this morning a rude awakening. Jonathan Block, a "press advance lead," a.k.a. logistics/travel-agent dude, ("not a spokesman!"), broke the news to us that McCain would not be answering any questions from the press, let alone speaking to reporters.

Apparently this is more of an "event" for photographers and television news trucks, a "real Air Force One action-type of thing," Block notes.

"His plane will land," explains Block. "The door will open. He'll walk out and give a wave. He might say hello to reporters, but then he'll board his motorcade."

After being pressed, Block adds, "It's just like when you get off a plane at the airport: You don't talk to the gate agents."

"Well," replies Unreal, "Gate agents and the American press are a little different."

"I understand that," says Block. "It was just an analogy to try to explain it."

So it shouldn't be a total loss, after the jump are few snippets of the straight talk we dreamed of having with Big Bad John:

Unreal: If elected to the Oval Office, Senator McCain, how do you expect to handle naptime?

Sen. John McCain: Well, Unreal, as you know, W has slept through more than half of his presidency. I would definitely curb that executive power. But I do believe that power-naps can be very beneficial, improving productivity as well as skin tone. Personally, I think I would schedule my daily nap for 5 p.m. The markets are closed, and our allies in Europe are in bed. I definitely don't want to be up when the Iraqi insurgents and the U.S. military are out playing bogeyman.

Senator McCain, if you are elected to the highest office in the land, do you expect your wife, Cindy, an owner of an Anheuser-Busch distributorship, to serve Bud Light or Beck's at state dinner parties?

Well, Unreal, we actually like the hard stuff, but I suppose it would depend on who was coming over.

Senator McCain, one more question, if you would: Draft or bottle?

Ah, draft or bottle. [Puts beery palm over mouth] I don't think I'm sufficiently well-briefed to answer that question. Get back to me after tonight's St. Louis fundraiser.