RFT Softball: Up in Smoke

Team RFT had a sniff of its old self last night. It smelled a lot like marijuana. Sticky, gooey, chronic marijuana. 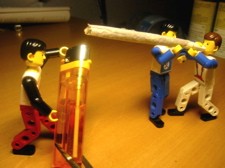 Then again, perhaps that odor was just the fumes wafting over from the Macanudo-size blunt being passed around in the nearby parking lot. Whatever the case, the secondhand smoke seemed only to stoke RFT's lethargy Monday night and produce more than a few flashbacks to seasons when the team routinely suffered defeats by double-digit margins.

From the onset yesterday, it was clear that this was not the same club that just two weeks ago rallied for its greatest victory of the season. Hitless in the top of the first, RFT took the field only to watch Chevys Fresh Mex bat its way through the order on the way a quick eight runs. Chevys added to its tally in nearly every ensuing inning and led 22-3 going into the final frame.

While Chevys' bats were finding a Jarlsberg wheel's worth of holes between RFT fielders, it was all RFT could do to not hit the ball directly into the gloves of its opponents. Chevys' man-mountain of a pitcher recorded so many 1-3 putouts that several RFT players questioned whether his girth wasn't exterting some type of gravitational pull on the ball.

As he does so often, Tom "Sox" Kavanaugh scored the first runs for the good guys, with a three-run blast over the fence in center field. Chris Schaeffer proved once again that the proper mixture of human-growth hormone and Busch beer can work wonders; the outfielder had another big day, going three-for-three at the plate and ably scooping up two flyouts to right-center.

Plays of the day, though, have to go to Ray "Ray" Richardson and Cathleen "Coach Cat" Joffray, who hit back-to-back, inside-the-infield home runs in the seventh.

Those "hits" brought the final score to 22-5 and left RFT with a 3-4 record on the season.

The team can only hope that next week's party in the parking lot will feature a more stimulating intoxicant -- say crack or meth. This team could use the pick-me-up.