Now for the Bad News About the Cardinals

Yesterday, I took a look at some of the biggest positives from the first half of the season.

And really, it's been mostly positive so far. A team that no one really gave any chance of competing has reached the All-Star break in second place in the division, and is leading the wild card race. All good stuff, right? What more could you possibly ask for? Hell, this season has been such a pleasant surprise that I even decided to go with an extra positive, just to reflect how optimistic I find myself feeling toward this year's team.

Well, now comes the bad news. And there is always bad news. In no particular order, here we go:

1. Total Bull: I have to say, I'm sorely tempted to simply write the bullpen three times and be done with my three negatives. The relief corps was supposed to be the strongest part of this team coming into the season. In fact, some predicted it to be the only good part of the team. Instead, the Cards' pen has combined to blow 21 saves, tops in the major leagues. Obviously, not all of those have turned in to losses, as Larry Borowsky of Viva El Birdos pointed out yesterday. He comes to the conclusion that the bullpen has probably cost the Cardinals about five games in the standings, compared to an what an average 'pen would have done. Myself, I think that may be a little low, but it's a good place to start. Five more games would give the Cards a 5.5 game lead in the Wild Card race, and put them only a game behind the Cubs for the division crown. Personally, I think the Cards could easily have won six or seven of those games, but let's not head down that road, shall we?

Bottom line, the bullpen has badly hurt the Cardinals this year. And that's really all there is to say. 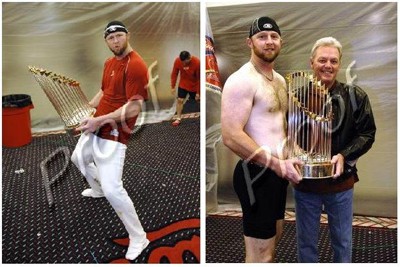 2. Chris Duncan: You know, there have been times in the past when I've probably been too hard on Chris Duncan. He seems like a nice enough young man, perhaps a bit immature at times (such as when he's dry-humping a trophy or something), but hey, he's still nearly a kid, after all. So he probably doesn't deserve it when I've poked fun at the way he looks when he's trying to track down a pop fly, or the giant wad of chaw in his lip, or any of those other things. However, when it comes right down to it, Chris Duncan is not helping this team win ball games. That's not me being mean to Chris, or crying nepotism, or anything else. That is a fact.

All along, we always said that no matter how bad Dunc was in the field, he made up for it with his bat. Well, unfortunately, that's just not true anymore. He no longer seems able to drive the ball with any kind of authority, and he still takes way too many empty swings at the plate. He still does a nice job of drawing walks, but that's just not enough on a team with so many other talented options in the outfield. He was sent down to Triple A to ''figure things out,'' then was brought up almost immediately despite hitting a robust .166 in Memphis. There were other options on the team to play first base at the time, and the Cardinals should have used them, if they were serious about Duncan getting himself right.

3. Always on the Level: Maybe most puzzling, and certainly most frustrating, is this team's propensity for playing to the level of their competition. Which, of course, is all well and good when you're playing good teams, but what about when you're going up against somewhat less than the best that the league has to offer?

Against the Rays, Red Sox, Phillies and Cubs -- some of the best teams that the game has to offer -- the Cardinals have gone a combined 10-7.

On the other hand, against the Pirates, Rockies, and Giants -- who are all well below .500 on the season -- the Cardinals have only managed to go 13-13. That's breaking even, yes, but you have to clean up on the weak teams if you want to be a true contender. You can't expect to consistently win against the good teams; that's what makes them good teams. You have to hang around even against the powerhouses and pad your record against the powder puffs. To this point, the Cards just haven't proven that they can do that.

I don't know if it says anything real about this team or if it's just a statistical anomaly, but either way, it's frustrating. You watch this team play so well against talented, high quality teams, and then roll over and play dead against the Pirates, and you just can't figure it out. Regardless, if this team doesn't figure out a way to roll up some W's over the league detritus, they're going to find themselves stuck firmly on the outside looking in come October.

See? That wasn't so bad, was it? It's been a pretty positive season to this point. Not all roses, of course, but far better than we expected. Now let's all go and watch some ESPN exhibition bullshit!