Well, the big news of the last couple of days, of course, is the deal the Brewers and Indians put together to make CC Sabathia a member of the Milwaukee club. And I'll bet a lot of you are asking yourselves, I wonder what Aaron thinks about the trade?

You're not asking yourself that? Oh. Um, well, huh. Okay. You want to talk about something else then?

Um, did you guys see that they just put out another Incredible Hulk movie? That seems really weird to me. Didn't they just make a new one of those about a year or two ago?

Hey, wait a second. This is a baseball blog. If you didn't care what I thought about the Sabathia deal, you probably wouldn't be reading this column in the first place, would you?

Oh. You just come for the sparkling wit and frequent grammar mistakes? Hmm. I'm not really sure how to respond to that. Well, anyhow, I'm going to talk about the CC Sabathia deal anyway, and don't try to stop me.

I'm a huge proponent of teams building from within. You've probably noticed this fact, due in large part to my constant ranting about not wanting the Cardinals to mortgage the future for a marginal current upgrade, and so on and so on. You know the drill -- I won't bore you with further diatribes. Suffice it to say that if the Cardinals were to make this same deal, with comparable players from their farm system, I would be down at Busch Stadium getting myself arrested for protesting without either a license or clothing.

This is just the sort of deal I fear the Cardinals trying to make, honestly. While Sabathia is a tremendous pitcher and will absolutely make whatever team he plays for better, he's also a free agent after this season. He's going to get a contract in the Barry Zito range, both in dollars and years, from somebody. To give up top-flight minor league talent just to earn the right to try and hold on to this guy after the season is over just doesn't make any sense to me for the Cardinals right now.

For the Brewers, though, this deal makes all the sense in the world. 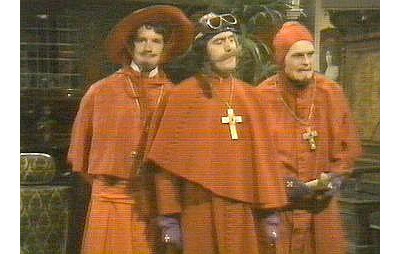 My answer was surprising as well, no?

Ah ha! Weren't expecting that, were you? That's me, just like the Spanish Inquisition.

The thing is, the Cardinals and Brewers are at different points in the building process right now. The Cards' farm system is just now getting to the point that they have a real pipeline beginning to form. Players like Colby Rasmus, Bryan Anderson, and Chris Perez are some of the first players to come through that pipeline. As of right now, the Cardinals have good depth in the system, but very little impact talent. Unless they want to spend $200 million a year in payroll in the next couple of years, that pipeline needs to be tended to, and allowed to mature.

The Milwaukee club finds itself in a very different situation.

The current Brewers squad is already a largely homegrown team. The only regulars (i.e., non-pitchers) who didn't come through the club's own farm system, are: catcher (Jason Kendall) and center fielder (Mike Cameron). Virtually all of their regulars are under the age of 30, and have at least moderately favorable contracts.

The Brewers are pretty much set around the diamond for a while. They have a young, talented team that's mostly cost-controlled for a couple more years. Don't get me wrong; there's still plenty of room for them to improve and all, but they don't have any huge, gaping holes. Their player pipeline has done its job; the players it produces now are just a bonus.

The Brewers also find themselves in a bit of a sticky situation pitching-wise.

Ben Sheets has already indicated that he plans on opting out of his current deal and testing the free agent market after the season. That's a very, very significant blow to the Milwaukee operation. While Sheets has certainly struggled in his career to stay healthy, when he does take the mound, he's one of the most dominant pitchers in the game. The amount of money he'll likely command in free agency probably means the Brewers won't be able to re-sign him. So, Milwaukee has an ace who will most likely be gone after the season, a lineup of young, cost-controlled players without a whole lot of holes, and one of the best records in the National League. They also have more talent still in the pipeline, enough so that they can afford to make a deal of this sort. If ever a team were in ''win-now'' mode, the Milwaukee club is it.

It makes sense for the Brewers to go all-in this season. They moved their top prospect, Matt LaPorta, plus several other useful pieces, to get CC Sabathia. With the way their club is currently constructed, though, they didn't absolutely have to have any of those players to fill immediate holes anyway. Matt LaPorta was blocked at first by Prince Fielder and in left field by Ryan Braun.

Sabathia, like Sheets, will most likely leave after the season to pursue the most lucrative contract he can possibly get. With the state of the Yankees' pitching staff, I personally would be shocked if he doesn't end up in pinstripes. (On the upside, vertical stripes are slimming.) When he does depart, the Brewers will take the two compensatory picks they receive for him and draft more impact players.

The Brewers' GM, Doug Melvin, decided to take a shot this season, and I think it's a great decision. The Brewers have a legitimate shot at chasing down the Chicago Cubs. Even if they don't, they probably have to be considered the favorites to win the Wild Card now.

Milwaukee gets one of the most dominating starting pitchers in all of baseball for the rest of this year. They now have one of the most potent one-two combos in the game at the top of their rotation. They still have the powerful offense that has propelled them to one of the best records in the NL. They're still in good shape to start putting it back together again next year after both Sabathia and Sheets move on to greener pastures. Melvin also did a nice job to only give up one blue chip prospect in LaPorta. Cleveland tried to pry away a second blue chipper, such as Matt Gamel or the like, but Melvin held firm and gave up more players, but less impact, overall.

As for Cleveland, the Indians receive one of the most promising young sluggers in the business, and a couple of other intriguing young players.

None of the other prospects in the package Cleveland received project to be All-Stars; indeed, most are seen as likely role players. Still, considering the difference in what CC Sabathia's services and Matt LaPorta's are going to cost over the next, say, six or seven seasons, there's a case to be made that LaPorta alone will produce more value all by himself. Still, this deal looks very good from both sides; it gives each team exactly what they're looking for.

If the Cardinals had made this deal, giving up Rasmus, Garcia, and Jess Todd, it would be a disaster. The Cardinals are still in the process of building the base of their next great team. For the Brewers, though, the time is now. If they don't make it this year, they may end up having to wait a couple more years to try and make a run again, considering what the loss of Sheets would do to that rotation. There was no better time to make a deal like this, and they had plenty of available assets to get it done. This is a very, very good deal, for both parties involved.

You know what else? This may force the Cubs, who can't afford to make a deal to like this, to try and make one anyway, just to try and keep up.

And anything that hurts the Cubs is, in my book, a good thing. So there's always that.

The bottom line is this: the Brewers may have just hurt the Cardinals' chances of making the playoffs significantly. Even so, I have to hand it to them, this was the right move, at the right time.

Sometimes you just have to go for it.