Redbirds Rolled Over and Died This Weekend

My father and I don't talk about baseball a whole lot, largely because we almost always end up in an argument.

Case in point: All season long, my dad has done nothing but tell me that the Cards are going to fall apart, that it's coming any day now. He's managed to ignore every victory, every win the team has managed to pull out, every exceptional performance we've seen along the way. Maybe you have a friend who does the same. It's really a little amazing, to be perfectly honest. After a while, you have to just step back a bit and admire the guy's persistence in the face of a reality that seems hell bent on proving him wrong. 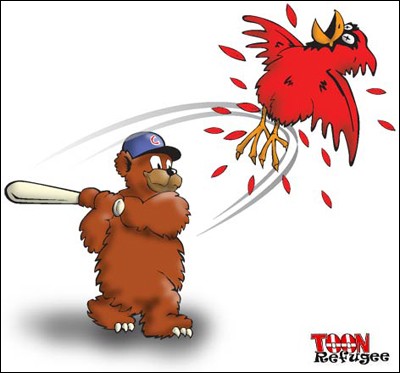 Though just plain terrible in design, this illustration (thanks, Google!) summarizes the weekend's three-game series.

So he just keeps telling me they're gonna fold, they're gonna fall apart, and I just keep looking at the standings, day after day, as the Cardinals keep trying to prove to everyone that they really are a good team. Dad keeps asking me if I think they're a real contender, and I keep answering that when you have the second-best record in the National League (50-40, behind Chicago's 53-36 record), you have to be considered a real contender.

Well, ladies and gentlemen, let me tell you something. I have had my faith shaken. Severely.

Over the weekend, the Cardinals played probably their biggest series of the year. The first-place Chicago Cubs flew into town with a 2.5 game lead. The Cards should have had some momentum on their side, having come out of a brutal road trip against some of the best the American League has to offer with a winning record. The Cubs have fallen off a bit lately, and the Cardinals have been able to put some pressure on them.

What this weekend series should have been was a chance for the Cardinals to take advantage of a weak road team -- a chance to make up some more ground. All the Cards had to do was keep playing solid baseball, and they could really tighten the screws on the Cubs.

This series should have been a statement. Instead, we got... well, it was still technically a statement, but maybe not quite the one we were all looking for.

Instead of stepping up their play and making a statement to the Northsiders, the Cardinals pretty much rolled over and died.

Oh, I'll freely admit that they got some definite help from the umpire in Game 1. (For more of my thoughts on that particular situation, you could always check here.) And yes, Roy Hobbs came up mighty large for the Redbirds in Game 2. Unfortunately, Rick Ankiel can't do it all himself, and that seemed to be the game plan.

The bottom line is the Cardinals scored seven runs in a three game series. That alone is enough to ensure you're not going to get the job done very often. Of course, when you consider that five of those seven runs were in one of the three games, that's a recipe for losses, plain and simple.

You can forgive it against Carlos Zambrano, a little. Crazy Z has always had the Cards' number, even coming off the disabled list. But Sean Marshall? Really, guys? The same Sean Marshall who came into the game with an 0-2 record and an ERA near five?

That's the pitcher that shut you down? Sean Marshall?

This team needed to come up big, and they came up as small as they have all season. I'm not panicking. I'm really not. But I have to admit, I'm a little bit worried now. I still think my father is wrong. The problem is, I'm not nearly as sure as I was before this weekend.