Baseball Card of the Week: Cal Eldred with the Brewers

With the current state of the Cardinals' bullpen, I thought this week's Baseball Card of the Week was a particularly fitting one.

This week's card comes to us from Ken Kitchin of St. Louis. It's a 1993 Triple Play Cal Eldred card. 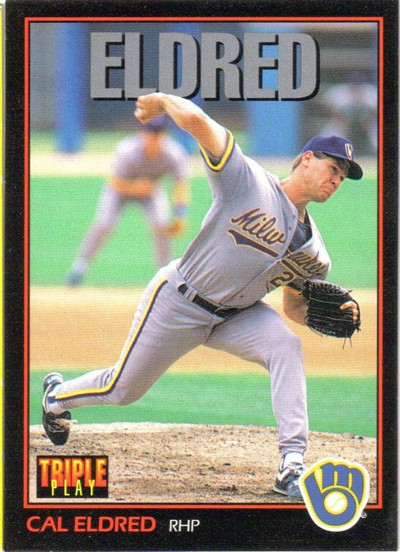 I always thought the Triple Play series of cards, produced by Donruss for just a few years in the early to mid 90s, was a fantastic set. The graphics were always unusually interesting, and the cards themselves were nicer than the usual sets you would get. They weren't quite as nice as the Upper Deck sets of the time, but still very cool.

In '93, Eldred was still a young fire-baller with the Milwaukee Brewers. He had made his major league debut in 1991, seeing limited duty in only three games. In '92, Eldred really burst on to the scene, pitching in 14 games for the Brewers, all starts, and going 11-2, with a 1.79 ERA. He was one of the young turks of the league, and it looked like the sky was the limit.

Eldred was Milwaukee's Opening Day starter in 1993, and pitched his first full season in the big leagues. The Brewers rode him hard, as he made 36 starts, threw 258 (!) innings, and went 16-16, with a 4.01 ERA overall. Unfortunately for Cal, all those innings began to catch up with him. He had the first of many injuries the next year, and ended up only pitching in four games for Milwaukee in '95. He finally made it back healthy for the 1997 season, but struggled, posting an ERA just a shade under 5.00.

Cal continued to struggle, and parted ways with the Brewers after the 1999 season. He caught on with the White Sox and pitched a little over one season for them, hanging it up early in the 2001 season. Eldred was completely out of the game for the 2002 season. Anyone who's read their Buzz Bissinger, of course, knows what happened next. Eldred began to get the itch to come back, in spite of his ridiculously patched up elbow, and started throwing on the side. He auditioned for a group of scouts before the 2003 season, and the Cardinals signed him to a minor league deal with an invite to spring training. He made the team out of camp, and was actually one of the most effective relief pitchers that year for a Cardinal team that had serious, serious bullpen woes.

Eldred pitched three years with the Cards, then hung it up after the 2005 season. Wonder if he's available for some 'pen work this year?

Thanks to Kenneth for the submission this week. Remember, if anyone has any submissions to send me, please send them along to asaeschafer@gmail.com.