OK, I know this post doesn't much have to do with this weekend's upcoming series against the Cubs (look for that tomorrow), but local rock band Gentleman Auction House -- some of the members are also big baseball fans -- stopped at the Baseball Hall of Fame in Cooperstown, New York while in those parts last month.

If you've been planning that dream trip to the HoF but can't make it this summer, these photos may have to do.

Here is the blog entry -- pulled from the RFT music blog A to Z. Read more about the band's tour in a tour diary by Steve Kozel.

We rolled out of the La Quinta before checkout and headed over to the dealership to pick up the van. Eric H. and I dropped everyone off and drove down to the airport to drop off our Chrysler Pacifica rental. A few minutes later, the rest of the band came to pick us up in the van. Last stop: FastTrack – to hitch up the trailer and hit the road. Say goodbye to Buffalo.

Kiley and I watched Temple of Doom and, despite being kind of bizarre and ridiculous, it was a slightly less embarrassing watch than Raiders. I will say that the female lead character (the blonde singer - I don’t remember her name) in Temple is pretty intolerable in the beginning, and only gets slightly easier to stomach as the movie goes on. I think the little Asian kid makes up for it though – it all evens out.

(That’s right, it’s the kid from The Goonies.)

We decided to hit up Cooperstown on the way to New Jersey, since we had an off day with nothing to do, and a few of us had never been to the Hall of Fame. Mike, Eric E., and I spent a few hours working our way through the museum, reading up on the gobs and gobs of names and stories and statistics that make up baseball history. We got to see Abbot & Costello’s “Who’s On First?” (my first time watching the whole thing, actually), and now Eric and I want to make St. Louis Wolves jerseys. Any buyers?

There was also the weird Yankees cow at the entrance – I don’t know what that was about.

I was especially interested in the history of St. Louis baseball: the early players, the St. Louis Browns, having the first female owner, etc.

I found the uniform regulations interesting to read, and I had forgotten that Wade Boggs ended his career in Tampa Bay. Weird.

We also had a solemn moment as we passed by the Cardinals team locker. 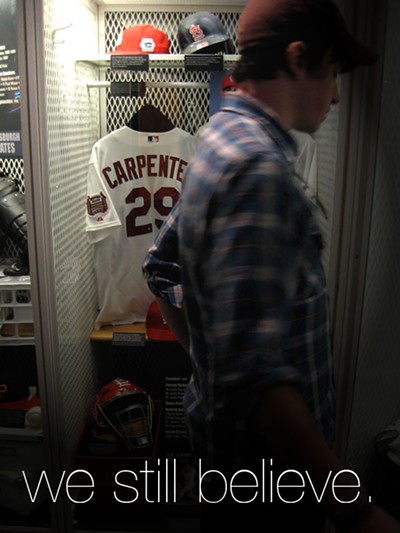 We met up with the rest of the band for a drink and a bite to eat. We noticed this intimidating message scrawled on the bathroom chalkboard. Whoa. 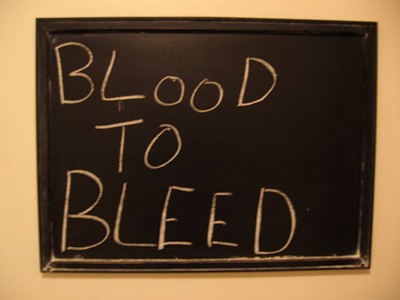 Walking back to the van, we stumbled upon a truly bizarre outdoor clothing display. 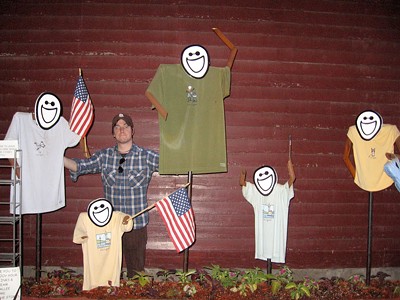 We also noticed a Starfleet® license plate, giving more proof to the (surprisingly) wide intersection of the sci-fi nerd and the baseball fan. Now if I can just find someone at Busch Stadium wearing a Cards jersey with “Scully” on the back…

We hit the road, continuing on to Flanders, New Jersey, where we would be staying with Mike and Stephen’s aunt and uncle, Donna and Chris. We got to their house late, probably after 1am, and Donna, bless her heart, was still up, keeping pizzas warm in the oven for us. After jamming the wedge and chatting a bit, we called it a night, with promises of a big breakfast awaiting us the next morning…