Perhaps it was the addition of Busch beer to the dugout cooler Monday night. How else to explain RFT's rise from the valley to the mountaintop? 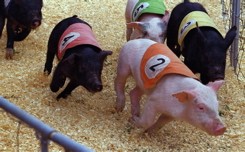 PigPen says: "That's 'scrappy,' not 'scrapple'!
Fortified in mind, body and AB's tastiest "spirit," Team RFT rallied last night to defeat BS Bar & Grill to the tune of 18-12. The victory marked the first time in three years RFT has defeated the perennial champs and came just a few short weeks after the good guys puked up a 22-1 humiliation-fest to BS to inaugurate the 2008 campaign.

In upping their record to 3-3 on Monday night, the RFTers proved once again that this year they're no longer content to serve as league doormats. The most visible testament to this effect was RFT's steely ace Kevin Powers, who took the mound to face his former team. After suffering through a five-run first inning, Powers settled down and found those rotating rainmakers that have made him the Cy Young of the U. City/Overland rec league three years running. (How and why BS let Powers go remains one of the biggest head-scratchers of the off-season.)

Infielder Keegan Hamilton had big socks to fill in taking over at shortstop for Tom Kavanaugh, who took his knee-highs to center to guard against BS's explosive firepower. Hamilton admirably plugged the gap, diving to scoop up a handful of hard shots that otherwise could have broken the game wide open. The plucky infielder also swung a hot bat, smashing a three-run triple in the second and picking up two more RBIs in the fourth. Third sacker Chad Garrison helped Hamilton -- henceforth to be known as PigPen for his dusty dives -- keep the left side of the infield stingy, snaring line drives and grounders alike with aplomb.

Chris "No Longer X-tian?" Schaeffer finally found his rhythm, going 4 for 4 at the plate, boosting his batting average nearly to the Mendoza line (a feat once thought impossible to reach). Equally effective in the batter's box was Matt Underwood, whose judicious batting eye walked home base runners in the third and fourth frames.

Alison Sieloff -- recently called up from RFT's corporate meth lab on the outskirts of Branson -- led the offense for the ladies with three smackeroos to shallow center. Similarly, spectator-turned-player Tanya Richards knocked a single in her first plate appearance of the season.

Play of the game, though, goes to player/coach Cat Joffray, who kept a six-run rally alive in the fifth inning when she extended a two-error blooper into a two-RBI double. Way to go Coach! Now, next time remember this: When we tell you to "wait for your pitch," that's just our way of kindly telling you not to swing. Ever.