Tonight, we'll see the New York Metropolitans for the first time in 2008. The last time we saw them, we watched Joel Pineiro, then just the Cards' latest pickup, try and stabilize a crumbling rotation, twirl a gem that dropped them into a tie with the Philadelphia Phillies for the division lead in the National League East.

I know that the Mets' collapse last year was a long process, with myriad causes. It took them pretty much all of September to blow what seemed like an insurmountable lead and let the Phillies overtake them. Still, though, knowing all that, I like to think, if only to myself, that the Cardinals were really the ones who ruined the Mets' season. Two years in a row, I like to think, the Cardinals broke the Pond Scum's hearts. 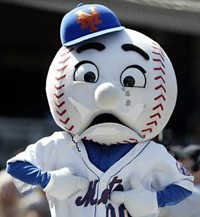 Mr. Met has reason to be sad this year.
Of course, the Mets have plenty of their own problems this season, enough that the Cards probably won't have the chance to ruin their year. It's pretty bad already, to be perfectly frank.

- They fired Willie Randolph, who I personally always thought was a very classy, smart manager, just a few weeks ago, in one of the absolute biggest fiascoes I've ever seen. For those of you who managed to miss it, the Mets waited until after a long home stand, flew out to the West Coast, won a game, and then fired Randolph in the middle of the night after the New York paper deadlines had passed. It was just bad news all around.

For so long, though, Randolph was seen as the perfect manager for New York. He was a former player, (albeit a Yankee) he had a great rapport with the media, great presence when he spoke, and seemed to have the fans on his side, never an easy thing in a place like Gotham. So what happened to make it all go so wrong? A curveball happened.

You all remember the curveball in question. It came out of the hand of Adam Wainwright, arced toward the home plate at Shea Stadium, and dropped into the strike zone, and the mitt of Yadier Molina, as Carlos Beltran stood frozen, helplessly watching the Mets's season come to an end.

With that single pitch, the Willie Randolph era entered the beginning of the end. Suddenly, the Mets went from a great story, a team with more talent than they knew what to do with, a brilliant GM who had assembled the whole thing through canny signings and trades, and destiny on their side, to chronic underachievers. Omar Minaya had assembled this unbeatable collection of players, right? How could they be seen as anything but underachievers?

The problem with that, of course, is that Minaya has essentially just put together his own personal dream team, rather than a baseball team that's really built to win it all.

The Mets are the oldest team in baseball, despite the fact that the left side of their infield contains two of the most dynamic young talents in the game today, in Jose Reyes and David Wright. There are a ton of injury concerns on the New York roster, and very little depth in the minors to shore up the holes, seeing as how Minaya traded it all away in building this team. So what you end up with is the second-highest payroll in baseball and a record that hovers right around .500. This squad may very well be underachievers; Jose Reyes certainly isn't looking like the player that we, (and Joe Morgan) all thought that he was. But Omar Minaya's Mets were a house of cards from the very beginning, and we're really just seeing the inevitable.

That being said, the Mets are still a very talented team. As I mentioned before, the left side of their infield is the envy of nearly every team in baseball, with two monster talents both just now entering their mid 20s. They have one of the two or three best pitchers in all of baseball atop their rotation in Johan Santana. Billy Wagner may have lost a tick or two on his fastball, but he still can make the very best hitters miss most nights. The two Carloses, Beltran and Delgado, are both former All Stars. They even have that cool soccer chant thing the fans do. So why is this team so downright ordinary?

To begin with, outside of Wagner, the bullpen is leaky. Aaron Heilmann, who previously served as setup man so admirably, has been awful this year. Duaner Sanchez, another former shutdown reliever, has slow in coming back to full strength following his shoulder injury in a taxi cab accident two years ago. The rest of the bullpen is your standard roster filler for the most part, and has performed as such.

The starting rotation features Santana and Pedro, but neither have really been what the Mets thought they were getting this season. Santana has pitched well, but not lights out as expected. Pedro has been okay, but not much more than that. John Maine has pitched solidly, but struggles to get past about the fifth or maybe sixth inning, putting added pressure on the 'pen. Mike Pelfrey, the Mets' bonus baby of a couple years back, is still hugely talented, but hasn't been able to put together consistent performances in the big leagues. Oliver Perez, well, we Cardinal fans know Oliver Perez very well, and let's just say he's been Bad Oliver more often than he's been Good Oliver this season.

The offense is still good, but again, not what most thought it would be. Jose Reyes is taking an awful lot of flack for his inconsistent play this year, despite the talent and excitement. Personally, I'm sort of hoping the Mets will decide to put him on the market. I wouldn't mind seeing him in red... David Wright is an absolute beast at third. Luis Castillo, their second baseman, is only hitting .260, but still getting on base at a .363 clip. Even Carlos Delgado, despite his unsightly .231 batting average, has hit 14 home runs this year. Overall, the offense isn't a juggernaut, but it isn't killing the club. This should be a good team.

The bottom line is, I'm not really sure why the Mets aren't what everybody thought they were going to be. They have a lot of over-the-hill players, sure, but they also have plenty of young guys with a ton of talent. The pitching is a little suspect, yes, but not to the point that you would expect it to totally sink a season. Guys like Beltran and Delgado are having down years, but neither one is looking at an imminent trip down to the minors or anything. To me, the Mets are just one of those strange stories we see in sports sometimes, of a team that's somehow much less than the sum of its parts. Apparently, Omar Minaya's baby just isn't as good as we all thought it would be. It's already cost Willie Randolph his job, and I have to think it could end up costing Minaya his if things don't turn around.

Then again, maybe it has nothing to do with the team, the manager, or the GM. Maybe it's just that curveball.