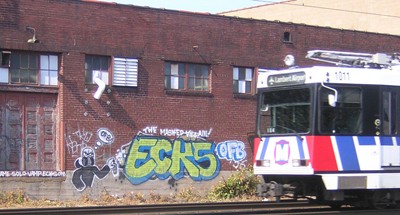 The St. Louis alderwoman whose anti-graffiti bill would have created an ID requirement for buying spray paint has reversed course and now says she wants to focus on education.

“Once the retailers are educated about what’s going on, it tends to level out,” Sixteenth Ward Alderwoman Donna Baringer told the Public Safety Committee today.

At two previous hearings, the committee had refused to vote on Board Bill No. 86. Presented with a watered-down version today, the committee voted 7-to-2 to send the bill to the full Board of Aldermen. (Committee Chairman Terry Kennedy and Alderwoman Phyllis Young voted no.)

After a second reading at the Board of Aldermen’s general meeting Friday morning, the bill will come up for a vote on July 11.

The new version of Baringer’s bill would require the 140 establishments selling spray paint in the city limits to post signs stating that it is illegal to possess ''graffiti tools,'' which include spray paint and wide-tipped markers.

Baringer sponsored the bill to go after the college-age ''taggers,'' who consider themselves artists, not vandals. She says she made sure to include the St. Louis University bookstore on the list of places that will receive the new signs.

Baringer's Got Her Ear to the Street.

“Through the grapevine, I had found out a lot of spray paint is sold in the bookstores on college campuses," Baringer said.

Baringer removed the provision that would have required stores to ask for ID when selling three or more ''graffiti tools,'' and to keep files of customers' personal information.

Also since introducing the bill, she discovered that the city had banned the sale of spray paint to people under age 18 in the 1990s. That earlier law is still in effect, but her bill adds an allowance for minors to buy spray paint if accompanied by a parent.

One tooth left in Baringer’s bill is the penalty for possession -- a $500 fine, 90 days in jail, or 90 days of community service -- cleaning up graffiti.

All fines collected will go to Operation Brightside.