St. Charles resident Lori Drew on Monday pleaded not guilty to charges of "conspiracy and accessing protected computers without authorization" in Los Angeles, where the offices of MySpace.com are located. 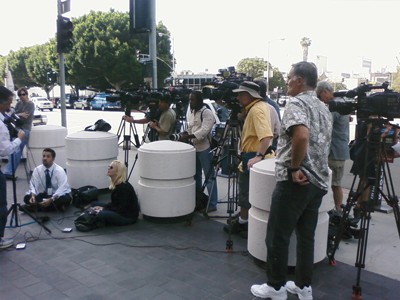 Media Village of the Damned: Press waiting for Lori Drew

LA Weekly staff writer Steven Mikulan was at the Roybal Federal Building Monday in Los Angeles and had this observation:

"The sly matron however, fooled the media, just as she had allegedly tricked Megan Meier into thinking she was reading email from an admiring boy whose postings then viciously turned against the distraught girl, who hanged herself. Finally, after a long wait, Drew emerged -- to say nothing to the press. "

The rest of Mikulan's report is here, at the LA Daily blog.

In November 2007, RFT staff writer Keegan Hamilton profiled the incident and the aftermath in his story, "Broken Lives on Waterford Crystal Drive." You can read it here.

Drew's particular story is familiar to St. Louis area residents -- she allegedly posed as "Josh," struck up a relationship with 13-year-old Megan Meier, broke off the fictitious affair and told Meier "the world would be better place" without her, all while posing as Josh. Meier later hanged herself in the bedroom closet. The story came to light more than a year later, in the fall of 2007, via Pokin Around the column by Suburban Journals reporter Steve Pokin.