Sunday's win was a costly one. Just the most recent in a seemingly endless line of costly games, in fact.

When Yadier Molina took a low throw from Chris Duncan and spun to tag out Eric Bruntlett of the Philadelphia Phillies -- before Bruntlett could touch home plate -- all of St. Louis held its collective breath.

Molina whirled around, made the tag, and then took a horrifying hit right to the side of the head. The catcher was hung out to dry by the throw, unable to protect himself or even try to brace for impact. 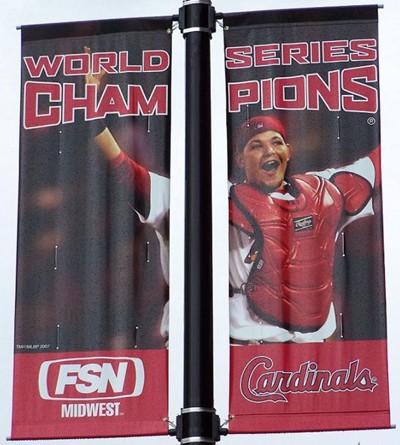 Molina featured on World Series banners outside Busch Stadium in 2007.

Watching as Molina spun and crumpled after the impact, there was a sharp intake of breath all throughout the city that you could feel, even if you couldn't hear it. As Yadier lay there, unmoving, as the moments spun out longer and longer, you couldn't help but consider the worst, consider just how unimportant the game suddenly seemed. This is a team that has known true tragedy before, that has lost men in the prime of life (Daryl Kile, Josh Hancock) and none of us who have followed the Cardinals will ever forget just how quickly things can fall apart.

Luckily, Molina appears to be fine. He suffered a concussion, and he won't play for at least a few days, but his limbs all work and he's still on this side of the flowers, so we can all breathe easier again. Easily enough, in fact, that we can start to talk about things again like just how great a season Molina was having before he got hurt.

Each year, it seems, we hear prediction of a breakout year from Molina, especially with the bat. And each year, we see slow, steady improvement, but not really a huge breakout that just stuns everyone. However, this year, Yadi may have finally put together that year that we were told to expect.

Going into the game on Sunday, Molina was putting up numbers that put him right at the top of the National League. His .295 batting average was easily the best of his career, his .354 on-base percentage puts him among the elite hitters in the league at his position, and he had walked more than twice as many times as he had struck out, with nineteen walks to only nine punch-outs.

Molina was even finally beginning to get some real recognition outside of St. Louis. He had been cruising along in eighth place in the All-Star voting, and had moved up as high as third place as of Saturday. Fans can still vote for him here.

The Cardinals being at home had something to do with it, of course, but just as important was the fact that Molina was starting to get recognized as one of the real young stars at the catcher position. Long seen as strictly a defensive specialist, a cannon attached to a body, Molina has grown into an all-around player. He still doesn't hit for much power, (.377 slugging percentage) but that's the only real knock on his game.

Unfortunately, now we may never know how good this year would really have been for Yadi. Concussions are funny things, and the effects can linger on long after the player feels well enough to be back on the field.

At the very least, you have to assume that any chances Yadier had of making the All-Star team have pretty much gone out the window, as he'll probably miss at least three to five games of prime voting time. He was robbed by voters of the Gold Glove last season; it looks as if he may be robbed now of a chance to play in the midsummer classic by a poor throw and bad timing.

For now, the Cardinals have immediate, pressing questions, such as how to fill in at the catcher position until Yadi can come back. But all of us, I think, can take solace in the knowledge that, come tomorrow morning, a young baseball player by the name of Molina will still be vertical and taking sustenance. He may have been knocked down in the middle of his breakout season, but there will be plenty more years for Molina. He will be an All-Star, and sooner rather than later. But if there is one thing the last eight years of Cardinal baseball have taught us, it's perspective. For now, just knowing he's all right is more than enough.

But he still held on to the fucking ball.