Going into this year's First Year Player Draft, the St. Louis Cardinals found themselves in a very different situation from years past. The farm system is much healthier now, and the team was in a position to draft more according to talent available, rather than constantly trying to build depth and fill specific positional needs. Whether they took full advantage of their current depth and made meaningful picks remains to be seen.

Brett Wallace, drafted first by the Cardinals, played third base at Arizona State University and won the PAC 10 Triple Crown each of the last two seasons
For better or worse, the Cards' 2008 draft will probably end up being largely defined by what young Mr. Wallace does. An advanced college hitter, Wallace won the Pac 10 Conference Triple Crown each of the last two seasons, taking home Player of the Year honors in 2007. Still, he was rated the 20th best player in the draft by Baseball America, mostly due to his perceived lack of athleticism. A first baseman for most of his playing career, Wallace moved to third in order to make room for the bat of Ike Davis, another slugger who was chosen by the New York Mets in the first round.

For my money, Wallace was the single-best bat in the entire draft, better even than Pedro Alvarez, who went second overall to the Pittsburgh Pirates. He has a short, powerful stroke from the left side that should produce for both average and power down the line, along with an advanced approach at the plate that really sets him apart.

The questions about Wallace center largely on his body, which is, to put it delicately, less than ideal. Few scouts give him much of a chance to stay at third base, and the Cardinals seem to be pretty set at first for the near future. He does seem to have better feet than you would expect from a player his size, and his arm strength is above average. He even stole sixteen bases in 20 attempts this season, so he's not completely immobile. If Wallace can end up playing even average defense at third base, they have one of the real steals of the draft, as Wallace's bat should get him to the majors, and fast. Even if he has to move back to first, he should make nice trade bait, but in that case, the Cards have miscalculated. 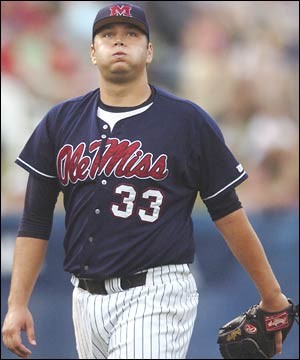 Lance Lynn.
The Cardinals' draft was heavy on college players, particularly pitchers. They took one such pitcher in the supplemental round, Lance Lynn. Lynn, a college right-hander out of Ole Miss, throws a sinking fastball, a change-up and a decent slider. He relies heavily on his fastball and change, along with a bulldog mentality that allows his less than dominating stuff to play up. For what it's worth, Lynn does have excellent mechanics, as well as a large, solid frame that should bode well for his future durability. Still, he profiles as no more than a third or fourth pitcher, in a system that's already well stocked with similar players. Still, he is a consistent performer who takes the ball every time out, which does have good value.
futureredbirds.com 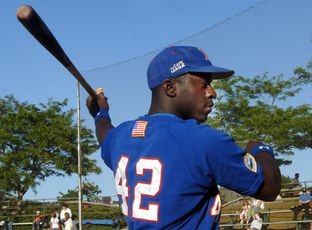 Jermaine Curtis, a third baseman from UCLA.
On the first day, the Cards largely stuck to that formula, taking college players with records of good performance for the most part.

Scott Gorgen, a righty sinker-baller out of UC-Irvine, boasts one of the best change-ups in the draft, but a small frame that caused teams to pass him over. Shane Peterson, an OF/1B from Long Beach State, has great on-base skills but some questions about the power in his bat.

Jermaine Curtis, a third baseman from UCLA, has been a huge disappointment this season but still draws attention for his wide base of tools.

One truly intriguing choice came in the third round, at 91st overall. The Cards took Niko Vasquez, a shortstop out of Durango High School in Nevada, the alma mater of Tommy Pham, another Cards' minor leaguer. Vasquez offers tremendous power potential out of a middle infield position, something the Redbirds have been sorely lacking since Edgar Renteria departed after the 2004 season. The knock on Vasquez is his lack of speed, which may end up forcing him to move off shortstop down the road. He does have a strong arm and good hands, though, and could probably handle either second or third. Nice pick at 91, as Vasquez was rated the 38th best prospect in the draft by Keith Law. Obviously there's more risk involved with a player of this ilk, but the potential payoff could be substantial.

Second-Day Picks On the second day of the draft, beginning with round seven, the Cardinals got much bolder, taking some riskier picks with higher upside. Their first pick of the day was used on Anthony Ferrara, a left-handed pitcher out of a Florida high school. Ferrara offers an ideal pitcher's frame, (6'3", 190 lbs.) to go along with a solid repertoire and an idea of what to do on the mound. He already throws in the 89-91 mph range, with an advanced curve ball and change-up. Ferrara fell as far as he did because of some shoulder issues suffered during his high school career. He consulted with Dr. James Andrews, who prescribed rest and strengthening exercises, rather than surgery. There's definitely some risk here with the arm troubles, but the upside on a player like this could be huge. With a body that projects to add plenty of strength and velocity, Ferrara could end up with three above-average pitches and solid command in the long run.

Other Players of Note Aaron Luna, 2B/LF, Rice University: Luna was Chase Daniel's high school running back, and he still looks the part. He's got a strong, mature body that allows him to hit for solid power, strong plate discipline, (.473 OBP this season) and a hard-nosed, gamer mentality. If he can stay at second base, his bat could make him a big plus. He doesn't fit nearly as well in the outfield, though.

Devin Shepherd, RF, College of Southern Nevada (JuCo): A fifth-round pick of the Minnesota Twins two years back, Shepherd's bonus demands sent him to Oklahoma. He was kicked out of the program for unspecified reasons and went to junior college in Nevada. He's currently committed to attend Oregon State next year, but you have to think he could be bought out of that. Shepherd is a tremendous athletic talent, with 30-plus home run power and plus speed as well. However, all that talent has yet to fully come out, as he's struggled to put his game together, and his behavior issues have hampered his development. Call him a less psychotic version of Elijah Dukes; a boxful of talent just waiting for the key. Another gamble on upside.

Mitch Harris, RHP, U.S. Naval Academy: Harris is a big-time talent. He's got a great frame and a solid repertoire, with a low-90s fast ball, cutter, slider and a curve he very rarely throws. However, he's committed to the Navy, which apparently isn't all that keen on letting people out of the military service to pursue other careers. Already 22, if Harris isn't allowed to perform some sort of alternative service, his five-year service commitment means he probably doesn't have much of a future in professional ball.

Joshua Hester, RHP, Freed Hardeman University: No, I've never heard of this school either, though it's apparently somewhere in the South. He did have a 105 strikeouts to 12 walks ratio in 89 innings this year, so he must have something on the ball.

Zachary Pitts, RHP, Louisville: Bad stats this year, with a 4.90 ERA, but he was better last season and has a great delivery.

Shane Boras, 2B, Junipero Serra Catholic HS: Yup, he's the son of Scott Boras. I guess it can't hurt to have the devil's kid on the payroll, huh?

Blake Murphy, C, Western Carolina: Who? Exactly. He posted a 1.241 OPS this season, walked more than he struck out, (51 to 32) and stole 22 bases. And I have no idea who he is. Project Prospect, a great prospect ranking site, called him the "best player in the nation no one knows about." Pretty cool, if you ask me.

Overall, the Cardinals' draft this year should deliver solid value to the team, but maybe not a ton of real upside. There are a few risky, high-ceiling picks, but they mostly went with solid performers who don't project to be real difference makers. Like I said earlier, what Wallace ends up doing will have a lot to do with how this draft is viewed. If he turns into an All-Star, the draft probably turns out to be a pretty good one. If he doesn't, and ends up as trade bait, the draft doesn't look to make much of an impact unless some of the second-day picks end up making serious contributions.

Bets to Contribute: I think Wallace could end up making a huge impact on this team -- if he can stick at the hot corner. He should end up hitting .300 pretty consistently, with a great on-base percentage and strong power numbers. What position he does it at is anybody's guess, though.

Lynn is nearly a finished product and is a safe bet to contribute at the major-league level. Gorgen gets a ton of grounders and should hold his own as he moves through the minors. Matt Frevert and Jason Buursma, a side-armer out of Bucknell, are both college relievers who should move quickly through the system.

I love the upside of a guy like Ferrara and I think Luna has a chance to become a Dan Uggla-type player at second, though with maybe not quite as much power. Murphy is quite a wild card, as his skill set is almost unheard-of at catcher.

In all, not really my kind of draft, but the Cardinals still did a very nice job of adding some depth, and some definite value, to their minor-league system.