Over the weekend, Adam Wainwright was removed from his start against Houston with what's being called a ''strained middle finger.'' What's a bit worrisome, though, is that after the game, Wainwright himself was quoted as saying that he heard a ''pop'' inside his hand after throwing a pitch. I don't know about you, but that sounds a little more serious than a simple sprain to me, and that got me to thinking. 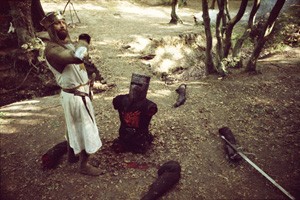 This man was diagnosed with a moderate shoulder sprain and put on the 15-day DL, strictly as a precaution.
We hear a lot coming from the Cardinals regarding injuries, and it's often tough to work out just exactly what they're saying. Last year, Carpenter had ''inflammation'' and ''bone spurs'' in his elbow. We haven't seen him since.

In order to help everyone out there better understand, I decided to put together a little translation manual for medical information from the Cardinals. That way, next time you hear the team talk about the status of an injured player, you'll be able to decipher for yourself what they really mean.

For instance, when the team says, ''Adam's finger injury isn't serious and lists him as 'day to day,''' what they really mean is that each day, they're going to have to decide whether or not to cut off his hand.

When they say Mark Mulder has had a setback and is struggling with his ''arm slot,'' what they really mean is that Mulder's left arm has become sentient and is refusing to throw the ball correctly, despite continued attempts to bargain with the arm. It doesn't seem to care about money, and getting it drunk just caused the arm to become violently angry and strangle several prostitutes. Some other common examples:

''Will be out 4-6 weeks'' = The player will be lucky to walk again. Even if he does, he'll most likely require a walker.

''A dislocated ______'' = The limb attached to the joint in question is, in fact, no longer attached. We're hoping like hell it turns up, but who has the time to look for these things?

''We're prescribing rest'' = The player is going to try and give his bloody stump time to scab over.

''Impingement'' = The joint has collapsed in on itself like a dying star and is now drawing in all matter surrounding it.

''The surgery was a complete success'' = He's more machine than man now. However, we do think the machine gun is a nice touch, don't you?

''A slight setback'' = While rehabbing, the player may or may not have been exposed to Uranium 238. No, don't ask how it happened. It just did, okay?

''Season-ending'' = The family asks that donations be made in lieu of flowers.

See, it's not nearly as confusing as it seems. Just keep these simple guidelines in mind the next time you hear an injury update. No, you don't have to thank me. I'm just doing my job, keeping the public informed. By the way, watch out for that puddle of blood in the clubhouse, okay? The tile gets really slick.