Last Night: Ben Lerman at the Way Out Club

What: Ben Lerman, a 33-year-old, proudly gay, foul-mouthed comedian based in New York City, on a DIY tour of the states this summer.

Where: The Way Out Club on Jefferson Avenue.

Bar dwellers and curious attendees were in for a treat when Ben Lerman’s Ukelear Meltdown rolled into town Thursday at the Way Out Club.

The Way Out Club on Jefferson Avenue, owned by Bob and Sherri, houses the eclectic musings of jazz, folk and rock musicians alike, and welcomes all types of personalities.

I tentatively parked my car along Jefferson, where I thought I might never see it again, I was drawn to the neon lights of the Way Out Club. After the door-person branded me with a festive martini stamp, I made my way past the bar to the showroom. The room was empty except for a lone guy on a laptop, and I realized I was there way too early. My large male friend I brought along for the ride, whom I like to call ''the bodyguard,'' made his way back to the bar, and I found a spot near the stage at the Formica-like tables.

Minutes later, in breezed Lerman who introduced himself immediately to my friend, and me and then he introduced the lone “laptop guy” who turned out to be guest performer, Corey Goodman, who makes up the one-man spazz attack Super Fun Yeah Yeah Rocketship. 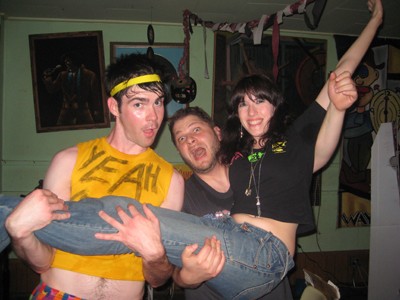 One awkward handshake later, Lerman asked if he could put me in a straitjacket.

The straitjacket is a part of a photo blog Lerman keeps of people in straitjackets that he takes along his tour, so of course I had to say yes, right?

After my brief stint as a psych ward patient, the show began sans the first performer, Boxcutter. Instead, Erin Hagan took the stage in all her guitar-toting, indie girl glory.

Perched on the stool on stage she looked like a glittery Nelly Furtado, pre-Timberland makeover. She sang with her eyes shut while she strummed her guitar and bit her lip between lyrics, but she was a mumbler. I caught a few lyrics including ''you were never really mine,'' so I got that she was angst-ridden. She divulged later that she wrote songs about boyfriends she hates and compared herself to Courtney Love.

She sang a song called ''Beautiful Loser'' about a blue-eyed guy she liked who had alcoholic tendencies. My ears perked. ''Did we like the same loser at some point?'' I wondered, and I immediately liked her. Then her chorus led into a “Na, Na, Na…” sequence where she encouraged the audience to sing along, and she lost me.

I liked how you could see fingerprints on the face of her guitar, that she prefaced each song with ''I didn’t write this,'' and her Che Guevara shirt, and I wish I could say the same of her music styling.

Up next was Lerman, the self-proclaimed gay singer-songwriter, comedian and videographer. This was Lerman's second visit to the Way Out Club, after coming here last fall.

After a few sips of his brightly colored drink and a few adjustments to his ukulele, he began. He kept audience laughing with songs such as ''Nana, nana, boo, boo,'' ''Ballad of Dread Butt Pirate of Chelsea,'' ''Smell Yo' Dick,'' ''Pussy Pantry'' and ''The Giant,'' a song about a man seeing a girl’s nether parts for the first time and realizing he’s gay -- to the tune of Ace of Base’s song, ''The Sign.''

After he belted out ''I wouldn’t suck your lousy dick if I was suffocating and you had air in your balls,'' I knew I was in love. My love for gay men is justified and continues.

Sadly, all good things must come to an end and the next act Super Fun Yeah Yeah Rocketship came to the stage dressed in a belly shirt, headband and tight multi-colored shorts. His props were cardboard cutouts of Stephen Colbert (man who plays a news caster on TV) and Sean Michaels (man who plays a wrestler on TV).

There were sound technical difficulties, but a peek into the bar found a video of topless girls circa 1970 playing on the television. Needless to say I was confused at first. But this is the standard fare of the Way Out Club, with its vintage stag films playing on a seemingly endless loop.

The show finally began and Rocketship sang such melodies as ''Awesome,'' ''Douche bags,'' ''Smell so Good,'' (where Goodman smelled the audience members) and a song about not having babies. His act proceeded with him jumping, flailing, and uncomfortably touching members of the audience, including an awkward cheek stroke for me.

On the walk to the car, I decided Lerman would be my new favorite gay comedian, since Ellen is too mainstream now. I asked my bodyguard what he thought. His response was “Come on before somebody steals you.”

I guess the show isn’t for everybody.