Spotlights from television news crews highlighted football-toting kids and members of the St. Louis Rams Tuesday night at a rare off-season appearance in St. Louis for the team.

Ahh yes, ''Bowl-a-RAM-a,'' as it has been known for the past dozen years, was a genuinely feel-good fund-raiser for the Epilepsy Foundation of St. Louis. Expected to raise between $30,000 and $50,000 in a single night -- depending on which member of the Foundation was asked -- the event is the largest fund-raiser for the foundation, which operates on a $500,000 annual budget.

So which players showed up?

Well Trent Green, who has come and gone and then come back into the spotlight as a Rams quarterback, was arguably the most recognizable face.

And if not all the players were familiar, their last names were screened on the back of their white event T-shirts. Wide Receiver Drew Bennett and Middle Linebacker Will Witherspoon acted as chairmen for the fund-raiser, which has netted more than $130,000 over 12 years. 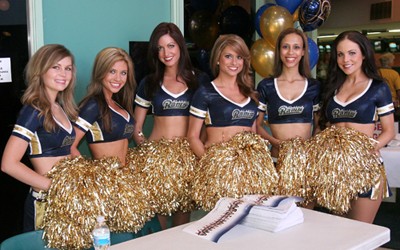 The team is approaching the end of its "organized training activities," which wrap up June 13. Then the "off-season" begins, running from June 13 to July 24, said Michael Yarbrough, director of community outreach for the organization.

Darla Templeton of the Foundation said the opportunity to rub shoulders with about members of the team -- $50 to watch, $100 to bowl – has remained popular because it's relatively cheap.

If you were wondering, the team's offense has compiled a record of 11-2 against the defense over the years.

While the Rams were all smiles Tuesday night, one of the fund-raiser's top organizers said he hopes the event continues next year. With talk of the team moving back to Los Angeles now since muted, Jeremiah Dellas said he is hopeful the team will stay in St. Louis. Dellas said he plans to gently lobby friend Mike "The Tackle" Jones and will dine with Rams majority owner Chip Rosenblum.

Dellas, chairman of the board for the Epilepsy Foundation of St. Louis, and a member of its national board of directors, said the fund-raiser is the most well-attended event throughout the year.

When former Rams owner Georgia Frontiere died in January, her children, Rosenblum and Lucy Rodriguez assured the public they had no intention of moving the or selling the team. However, those comments may not be much solace to the die-hard fans here.