An oak bookshelf in Left Bank books, located just inside the room meant for guest authors to speak about their books, is lined with tomes of very local interest. There are pleasure reads like The Gashouse Gang, historical accounts like Civil War St. Louis and The Chouteaus, and guides like Backroads & Byways of Missouri, Here's Where: A Guide to Illustrious St. Louis and 60 Hikes Within 60 Miles: St. Louis. You get the idea. But on that same shelf, although fewer in numbers, are less recreational reads about the region. One such book to be placed there soon is Mapping Decline: St. Louis and the Fate of the American City. 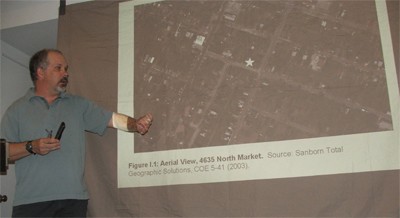 The recently published Mapping Decline and its author, University of Iowa history professor Colin Gordon, were the focus of an at-times heated discussion Wednesday night about the seemingly irreversible fate of this Gateway City.

St. Louis' bubbly, slightly funky Central West End, within a mile of the emerald-shaded Forest Park and the shadow of a gleaming hospital and university campus, seemed foreign to the topic at hand Wednesday, as much of the two-hour discussion grew out of now-crumbling North St. Louis, where many of the big brick houses that proudly stood 90 years ago are today burned-out shells or just plain gone – their bricks used for patios in Houston and historically restored houses in Atlanta – as the house's materials were worth more than its whole.

While the West End neighborhood was buzzing with sidewalk diners, dog walkers and latte sippers, inside Left Bank, Gordon and an audience of about 30 people of middle to senior age got down to a sobering topic that's tempting to sweep under the rug because of its ugly nature: the policies which allowed race and class segregation to thrive in the city and St. Louis County over the past century. The results have been a deteriorated city and economically segregated region not unlike other former industrial cities.

A myriad of zigzagging zoning policies, the gerrymandering of special economic zones and racism directly and indirectly led to St. Louis' – and many other traditional American cities' – decline, Gordon summarized.

''Zoning and policy was deeply racialized at a critical point in the city's history, when it was undergoing growth and demographic changes,'' he said, speaking of the early to mid 1900s.

At the city's most crucial growth point, polices of outright racism, and to a lesser extent, class division, were established that would contribute to St. Louis' eventual descent.

One such policy, enacted by the Real Estate Exchange of that period (to which Gordon lays much blame) was drafted in 1923 and then elaborated upon in 1941.

''Inside this red line realtors could sell to African-Americans,'' he said, pointing to a section of North St. Louis formerly known as The Ville on a projected map. ''If you sell outside the red line, you lose your license. This repeatedly happened and was held up by the (Missouri) real estate board. In local and national reality at the time, selling to to the buyer of a race not already established in the neighborhood was unethical, and in St. Louis, formally grounds for losing your license.''

These arrangements, known as restricted deed covenants, were judged illegal by the Supreme Court in Shelley vs. Kraemer, a 1946 case out of, you guessed it, St. Louis. Blacks were not the only minorities not allowed to buy a house wherever they chose, though in St. Louis, were the most affected. Most of the standards of St. Louis covenants of the 1920s were drafted by the Real Estate Exchange and it specified ''negroes.'' Earlier agreements excluded ''mongolian'' and ''hebrew.''

Post-World War II St. Louis saw white flight from the city into the nearest suburb in most cases, Gordon's research of U.S. Census data showed. Those predominantly residential suburbs ''poached'' the city of resources they did not have– commercial, retail and industrial supplies – while placing restrictive zoning policies over their own territories, keeping out lower-class citizens, who in reality were often minorities.

Long-established minority communities in St. Louis County – such as Elmwood Park and North Webster Groves – continued to exist while county leaders surrounded those areas with new development, all the while excluding them from incorporation, and thusly schools and public services.

As the county's development boom continued into the 1960s, those minority-populated areas were deemed ''blighted'' and residents forced out. Members of the Elmwood Park community, which had been established for about 75 years when its residents were forced over the years of 1958-1964, were offered public housing applications for developments back in St. Louis City. They tried to sue over the matter, but the judge ruled they had no standing in court on the grounds that they did not live in that community any longer. 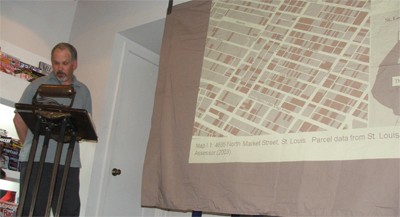 The heavily researched Mapping Decline relies on Census data, court records detailed maps – lots of them – to tell the story of St. Louis' population decline in an what Gordon admits is a cold, academic tone. Tackling the charged, ugly issue of the city's history of organized class and race bigotry calls for such treatment.

Reviews of the book in traditional press have been “grumpy,” according to Gordon, referencing one in the St. Louis Post-Dispatch.

The author said he anticipated some animosity, and recognized it after a few people in the audience Wednesday challenged assertions about, well, their neighborhoods.

''I do feel sort like an interloper because you're talking about a city they grew up in,'' he admitted after the two-hour talk had finished. Chunks of the audience got up and left during the latter part of the discussion, a reaction perhaps to others in attendance, who prattled on with their own opinions.

''It's bad idea to write a depressing book about a city and then go to that city and talk about it,'' Gordon joked.

He did manage to sign a few copies though. The book, a heavy, hard-backed thing with a glossy jacket, is chock-full of maps that show the process of segregation over decades. For anyone with an interest how things came to be here, it's a recommended read. There is no one clear reason for the city's decline, but some at Left Bank were looking for a solution.

So how does a city like St. Louis reverse its decades-long downward trend? That question, in form or another, was asked no less than four times. In the words of one man in the audience:

''I know you're a historian, but can you do a little forecasting? How do we fix this?''

Replied Gordon, ''You don't want to hear my answer.''

He did provide some reasons – using other cities as examples – of how to repopulate and better a city struggling with its population and a meager public school system.

Combing the the ''postage-stamp'' suburbs that speckle St. Louis County with the city would be one solution.

But problems also are entrenched in the construction of the city itself: Unlike Chicago, St. Louis is not in the center of a county; it operates as its own county and doesn't reap the benefits of an affluent surrounding county. Since peaking in population at the 1950 census (900,000 people in St. Louis proper), the city has experienced falling tax revenues from population drops and special tax-free (for a while at least, through Tax Increment Financing districts) projects.

''In a sense, my goal in this book is to try to explain why this happened,'' Gordon explained at the start of his talk.

''My argument, in its starkest form, is that this is not simply a consequence of private homeowners. This is not the free market work of people just wanting a fancier house in the suburbs. The web of policies dramatically shaped these demographic boundaries.

Mapping Decline is available at Left Bank Books on Euclid Avenue in the Central West End. Gordon will appear on Monday on KMOX's Charlie Brennan Show and on Tuesday on KWMU's St. Louis On the Air.