Chris Duncan Looks Lost Out There

When the 2008 season opened, I, like a lot of other people I'm sure, had various ideas about what this year would be about. Lots of us thought it would be about assessment, about looking at the current resources and deciding just what we have here. Others thought it would be about angry fans, disgusted with ownership for going cheap in recent years. Still others thought the story of this year would be that of a surprising playoff run -- from a team no one gave a chance. So far, all three of those perspectives have some merit, but the real story of this season is one that I don't think many of us saw coming.

The story of this season is quickly becoming the story of loyalty. Specifically, we're seeing Tony La Russa's loyalty placed front-and-center, as he makes the decisions that move the team forward or backward.

In spring training, Cesar Izturis, the Cards' new shortstop acquisition, struggled horribly. He didn't hit, which everyone expected, but he also made errors left and right, which was a definite surprise. All we heard when he came in was how good his glove was. ''He's a former Gold Glove winner, he's just a little off from not playing regularly, just give him time to get up to full speed,'' and so on, and so on, and so on. Very few of us believed it, feeling like we were seeing a disaster in the making; Junior Spivey all over again. Tony stuck with his player. He stood right behind him, no matter how loud the criticism became. Now, at the end of May, Izturis may not be an All-Star, but he's certainly not the worst shortstop in the game. Loyalty rewarded.

Jason Isringhausen, the team's veteran closer, put the manager to the test again, just recently. Whether by age, injury or just poor mechanics, Izzy was killing the team one blown save at a time. Tony stood by his closer, trying to allow him to work through his issues on his own. Eventually, Izzy fell on his own sword, sparing the club any more losses and La Russa the job of having to take him out. The club tried to work him back in gradually, but that didn't work either. Now Jason's on the disabled list, trying to figure out what went wrong, and the Cards' pen has been outstanding. La Russa made the right choice, but only after all other options were removed. How many games did loyalty lose? The exact number doesn't really matter, but the Cardinals find themselves in second place, looking up at the Cubs, largely because of those extra losses.

We've seen less-dramatic examples too: Ryan Franklin being anointed the closer because he's the guy who's been here. Russ Springer being brought back at age 39. Rick Ankiel justifying the faith that the organization had in him. The list goes on and on. 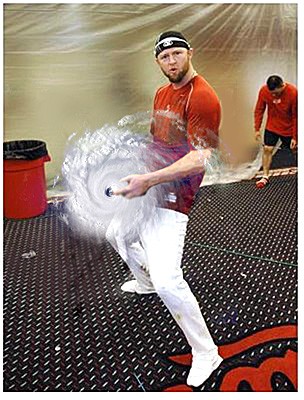 The happier days of Dunc'

And now we have Chris Duncan.

Though the RFT has poked fun at the player's off-field antics in the past, his on-field performance should more than raise the eyebrows of the club's management.

Duncan is the son of Tony La Russa's long-time pitching coach and confidant, Dave Duncan. Tony has watched the kid grow from a skinny, clumsy kid into a power-hitting left fielder at the major league level. Chris Duncan has known La Russa his whole life. Tony has every reason in the world to be loyal to Chris. The only problem is that right now, Chris Duncan is hurting this team.

Duncan had off-season hernia surgery. Maybe he's not fully healthy yet. Maybe he never had a chance to get back up to speed in spring training, as he tried to get physically sound. Maybe he's just struggling to adjust to pitchers that have a very good scouting report on him, and are feeding him all the junk that he can't handle. Maybe he's just lost it. Who knows?

You know what, though? It doesn't matter what the problem is. There's a problem. Duncan's spot on this roster, and in the outfield, has always been predicated on him just mashing the ball. He may not be much of an outfielder. He may strike out more than you like. He may bother anti-tobacco activists everywhere. But the man can kill a baseball.

The only problem is, that's not really true anymore. Duncan isn't hitting for power. He's still getting on base, but just doesn't seem to be able to drive the ball any longer. He still looks lost in the outfield. The fact is, Chris Duncan just looks lost right now, period.

So, how long will this go on? The thing is, is that Duncan still has options. He can be sent down to Memphis to try and work himself back into form at any time. He can go down, take all the time he needs, and come back the player we saw early last year, and in 2006, as opposed to what we see out there now. Get healthy, get confident, get up to speed, hell, get laid. Whatever the problem, Duncan has the options available to be able to go down and get it fixed.

And so the question now is whether or not that will happen. How loyal is Tony? Will he be able to see that Duncan needs to take a step back in order to get going forward again? Or will he continue to run Chris out there, night after night, even as Duncan works himself deeper into a hole? There's an awful lot at stake here, not just for the team, but for the player himself.

This is a tough situation, one that has no easy solution. Well, that's not entirely true. There is an easy solution. Do what's right for the team, and for Duncan himself, and send him down. Let him try to fix himself. Don't let blind loyalty to Chris, and his father, continue to cause problems.

Ultimately, this decision promises to say an awful lot about where this team is going this year. Tony's loyalty to his player, his team, and his coach, is a wonderful thing. Loyalty may be the best thing about La Russa, when it comes right down to it. But a change needs to be made, and Tony has to see that.

I'm not angry at Duncan for struggling this season. It happens. But to continue running him out there even as he struggles, day after day, is hurting the team. And in the end, that's where La Russa's loyalty truly needs to lie.