The new Indiana Jones movie is not that bad. The only problem is, that’s the best I can say about it.

Save for a few groans and guffaws at some of the more painfully inept parts, Indiana Jones and the Kingdom of the Crystal Skull was well-received by a packed house at a midnight premiere at the Moolah Theatre in Midtown. 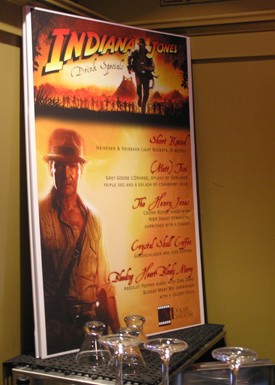 While our own Robert Wilonsky’s had a harsh take on the new film ("Indiana Jones and the Fortress of Sad Decline"), perhaps because I had braced myself for the latest Luscasfilm abomination, I wasn’t that disappointed. After all, it is still an Indiana Jones movie—it is just more Temple than Raiders. Save for some heinous CGI, a strange fascination with rodents, and maybe a little too much mumbo-jumbo in the plot (which makes the previous three installments seem downright rational), it was totally worth my $10.

What the film does best is slip in some not-so-sly references to itself, such as a helping head from a statue of ex-sidekick Marcus Brody and a hilarious ophidiophobia (fear of snakes) scene. The multiple chase sequences were entertaining and very much in the vein of the original trilogy. And, of course, there is a face that gets melted because of supernatural powers.

Kingdom of the Crystal Skull made for a great movie theater experience (even though there wasn’t a fedora to be found in the audience, strange for an opening night crowd), just like a film in the Indiana Jones franchise should. Summer blockbuster season has arrived. Now we just have to wait for Batman to let it get good.