You remember Garrett Stephenson? He was a Cardinal pitcher back in the late '90s and early 2000s. Righty, tall, decent stuff, never really had great results. He did have a couple of solid season wearing the Birds on the Bat, though, winning sixteen games in 2000. What I remember most about the Garrett Stephenson era, though, is watching him self-destruct for about one inning in any given outing, then listening to his post-game comments, as he talked about how well he pitched, except for just that one little pitch. 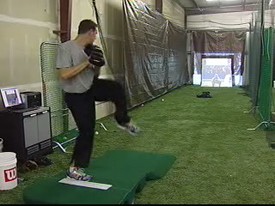 Stephenson at his new youth training facility in Boise, Idaho.
It never failed. Pretty much every game, Stephenson would go out there, cruise along for a couple of innings, looking like he had everything under control, and then bam! He would go out, walk the leadoff hitter in an inning, give up a hit or two, and then the wheels would just fall completely off. He would end up with a line of about four or five innings, somewhere between four and six runs, and all of them would have come in that one inning.

He also never failed to disappoint on the post-game show, either. Every time he walked off the mound, having put his team in a hole, we had to hear about how good his stuff was out there. How great he felt, how well he pitched. Except for that one bad pitch that the guy just happened to hit for a three run homer. By the end of Garrett's stay here, you could see the palpable hatred on manager Tony La Russa's face when he was asked about Stephenson's performance. The game made him angry; Garrett's excuses made him much, much angrier.

Pineiro this earlier this year at Cardinals spring training.
I'm afraid that I'm seeing some of the same tendencies in Joel Pineiro lately. Each of the last few times out, he's been cruising along, pitching well, until bam! He walks the leadoff hitter, gives up another hit or a walk, then throws just that one bad pitch that just happens to get cranked for a three run homer. Last time out, the Cardinals handed him a five run lead. He couldn't hold it. Walks, hits, and the long ball all contributed to an early, five inning exit for Pineiro and more stress on a bullpen that's already been counted on for too many innings already.

On Tuesday night, same story. The Cardinals hand him a two-run lead. He's cruising along nicely, striking out Padres hitters left and right, right up until that sixth inning. A two run lead, and Joel walks the leadoff hitter. For a moment or two, it looks like he's going to escape from the inning without damage, then he walks another batter, and then up comes the Crushin' Russian, Kevin Kouzmanoff. One center cut fast ball later, the Cardinals are staring up at a 3-2 deficit.

I can't blame Pineiro for the loss entirely, of course. The offense just couldn't get it going against Greg Maddux, but you know what? That's what happens when you go up against a Hall of Famer. But Pineiro had the Padres, the worst offense in the majors, up against the ropes, and he let them off the hook with free passes.

In the post-game comments, I again flashed back to the Garrett Stephenson days, listening to Pineiro. He told all of St. Louis just how good his stuff was (""I thought I had great stuff," Pineiro told reporters.), just how well felt he had pitched. Except, of course, for the little matter of that three run homer. Just that one bad pitch that ruined his whole night. Great stuff, great performance, just one bad pitch. On the surface, it may look true, with the three-run homer the only real blemish on his night. The real problem, though, of course, wasn't the home run ball he served up to Kouzmanoff. The real problem was the fact that, with his team comfortably in front of the impotent San Diego attack, Joel went out in the sixth and couldn't do the one thing a pitcher needs to do with a lead: throw strikes.

Tony's comments after the game were more than just slightly reminiscent of the old days, too. He was angry, talking about Joel’s night in much different terms than the pitcher himself had used. He talked about the leadoff walk, about Pineiro's inability to hold on to the lead his team had given him. If you closed your eyes and just listened, you could almost believe it was 2003 again, and Stephenson had just gone out and gotten smacked around in the fourth inning.

So far, Joel Pineiro's tenure in St. Louis has been a relatively successful one. But I'm beginning to see a pattern developing; a pattern that we've seen before.

A quick word of advice, Joel: go back and find some of the tapes from the Garrett Stephenson years. Watch, listen, and learn. You've got a perfect blueprint in front of you on how to get on your manager's bad side, and eventually get run out of town. I suggest you take note, because lately, it's looking an awful lot like history repeating itself all over again.