Use federal money to put teenagers to work on nuisance properties in north St. Louis?

Mayor Francis Slay gave the idea a "thumbs up" back in March, when Congressman William "Lacy" Clay obtained a $536,000 federal earmark to create 300 summer jobs, to be administered through the St. Louis Agency on Training and Employment (SLATE), a one-stop career center with offices downtown on Olive Street. 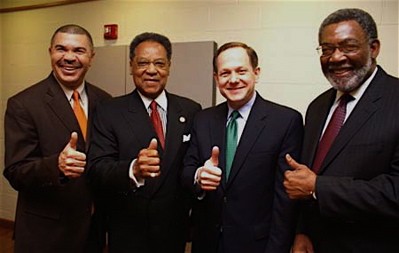 Thumbs up! The powers that be were all smiles back in March when U.S. Rep. William "Lacy" Clay brought home $536,000 to create summer jobs. From left: Congressman Clay; Henry Givens, president of Harris-Stowe State University; St. Louis Mayor Francis Slay; and Tom Jones, executive director of SLATE.
The money essentially doubled the number of jobs that would be made available during a career fair held each May at Harris-Stowe State University.

The good word was featured in the April issue of the city's "Newsgram," which noted, "A special feature of the new summer jobs program is entitled, 'Project Youth Pathways,' an initiative that will focus on distressed neighborhoods in Northwest St. Louis."

Evidently Slay has since changed his mind about the idea of using federal money for Pathways.

Perhaps not coincidentally, the flip-flop occurred after Riverfront Times reported that Pathways' main client would be north-side land baron Paul McKee Jr. For the past several years, McKee has taken a hands-off approach with the hundreds of properties he owns on the north side. By allowing the properties to become nuisances in the eyes of the city, he gets city crews to do the maintenance, then pays the bill for labor, along with a tacked-on administrative fee.

Recent years have seen rampant speculation about McKee's intentions for his burgeoning real estate portfolio. Last year the state legislature okayed a new financial incentive seemingly tailored for McKee, creating a new tax credit of up to $10 million annually for developers who launch large-scale projects in impoverished areas. (For more background, see "Phantom of the Hood," "Phantom of the Hood ,Part 2" and other Paul McKee stories in our archive.)

Yesterday morning a producer for KMOX (1120 AM) talk-radio host Charlie Brennan called and told me that Jeff Rainford, Mayor Slay's chief of staff, had called the station to discredit the story I wrote.

Rainford put the blame on Marvin Steele, a businessman who, I had reported, was heading up Pathways under the auspices of a local nonprofit called Better Family Life, and that group's president, Malik Ahmed.

Rainford told KMOX that Steele didn't have his facts straight, and that no federal money would be used to maintain private property.

That's also what Steele told me when I sought him out yesterday at the job fair, where teenagers descended in droves. "The federal money is the issue," Steele said. "All I know is federal funds will not be used on private property."

I asked Steele what had changed since we spoke a week ago Friday, when I'd called him to clarify his plan. I had been told by SLATE executive director Tom Jones that using federal money to spruce up private properties was a no-no. At that time Steele had told me that he saw no problem with the arrangement.

Yesterday he declined to elaborate, saying he didn't want to speak "off the cuff," then excusing himself to attend to a family emergency.

It's worth noting that Steele is no wet-behind-the-ears volunteer. He served as a deputy director of the city's Economic Development Agency in the 1980s, before starting M. Steele Enterprises, a general contracting company. (He now heads a new venture, called Urban Solution.) His son, Marvin Steele Jr., is Congressman Clay's office manager.

Meanwhile, as late as last Thursday afternoon, Tom Jones had altered course, assuring me that federal money would be there for Pathways. Jones told me that he had spoken with someone at the Department of Labor about what rules might apply under the Workforce Investment Act, which created "one-stop" career centers such as SLATE. "There is no prohibition in there regarding where kids can work," Jones said. "The feds I talked with indicated there was no prohibition.

"If you want to call it free labor, that's fine," he said. "I call it an opportunity for the kids to learn how to work."

Added Jones: "We do try to get the employer to pay them. Sometimes the employer cannot afford to bring on a new staff. Many times they may not need the labor. They see this as a way to provide some experience for these kids."

The only stipulation in Clay's earmark, according to spokesman Steve Engelhardt, was that it be administered through SLATE. As of last Thursday, SLATE was prepared to disburse $134,000 for Pathways -- enough to hire 84 young people at $6.65 an hour, full-time for six weeks.

So if the kids aren't going to work on the public dime, who will pay them?

I called Rainford, Jones and McEagle spokesman Dan Brungard, seeking clarification of the current state of affairs. None has called back.

Maybe I should ask Brennan at KMOX.