It wasn't supposed to be like this for the Padres; not at all.

San Diego came into this year with a pitching staff that boasted last year's Cy Young award winner (Jake Peavy) at the top, one of the best road pitchers in all of baseball as the Number 2, (Chris Young) and a Number 4 who's won more games than any other active pitcher, plus three Cy Young awards of his own (Greg Maddux). They had an intriguing reclamation project, (Mark Prior) of a pitcher who finished in the top five in the Cy Young voting in his rookie campaign. They even picked up a solid soft tossing lefty, (Randy Wolf) just to round the whole thing out nicely. The staff was loaded with talent and experience to make any other team envious. One of the best 1-2 combos in the game, one of the best and brightest to ever put on a uniform, and a former phenom-turned-rehab-wonder. It should have been far more than enough. 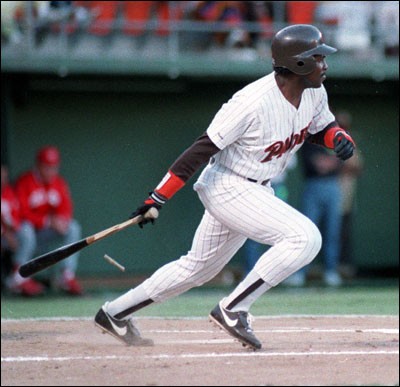 The Padres have pitching in spades but could use a bat like Tony Gwynn's this season. The lack of offense explains their pitiful 14-30 record and putting up only two runs in a loss against the Cardinals Monday night. (photo: http://www.signonsandiego.com/)

In addition to the starting staff, the Padres came into the season with one of the strongest bullpens in the National League backing them up. With the most prolific closer in the history of baseball anchoring a stable of effective young arms, San Diego should have been well on their way to shutting opponents down on a nightly basis. Cla Meredith, the wickedly effective side-armer, and Heath Bell, the big-bodied fireballer, were expected to bridge the gap to Trevor Hoffman, basically shortening games to six or seven innings.

Unfortunately, the Padres currently find themselves sitting fourteen games below .500, at 14-30. They have the worst record in all of baseball. So what in the world happened?

Well, it's pretty simple. Somewhere along the line, the Padres forgot that there are two sides to the game of baseball. Simply put, they forgot about hitting.

After last night's game (an 8-2 loss to the Cards), the Padres have scored 152 runs in their first 46 games. That puts them on a pace to score well less than 600 runs for the season. Now, that isn't anywhere near the fewest scored ever, (that feat was accomplished in 1908 by our very own St. Louis Browns, who managed only 372 runs the whole season) but it's still a ridiculously low total.

Even with their vaunted stable of pitchers, the Padres just can't score enough runs to win any games this year. It's a shame, too, as I've always actually liked the Padres. Not sure why; I just do.

PETCO Park, the Padres' home field. Pictured just below the crowd is the park's Event Horizon, a boundary past which baseballs are unable to travel, except under special circumstances, such as the presence of Albert Pujols.

I think the larger problem for the club is much the same as what the Colorado Rockies faced for most of their history, only in reverse. The Padres play in the most run-suppressive ballpark in all of baseball, PETCO Park. The stadium suppresses home runs especially brutally, so much so that I think the Padres have really had a tough time trying to decide what sort of roster to build. All those years we saw the Rockies struggle to figure out what to do with a stadium that turned infield flies into gap doubles, we're seeing much the same now.

The Padres are currently going with the same theory Colorado tried for years, to little avail: play to your ballpark's strengths. Colorado constructed the Blake Street Bombers to try and take advantage of the homer-prone confines of Coors Field and inflate their numbers even further; San Diego has gone with an overly pitching heavy approach to try and maximize their ballpark's strengths. The idea is that the park already keeps run scoring down, so just put together the best pitching staff you can, and opponents will never score.

Unfortunately for the Padres, we're seeing the same thing that usually happens when a team tries to build a truly one dimensional team: very, very few wins. The game simply cannot be won by a team that only has one way to succeed.

I have absolutely no idea when, or even if, the Padres are going to be able to pull themselves out of this current trough they find themselves in. They have a few interesting hitters in the minor leagues -- Matt Antonelli, a second baseman, and Chase Headley, a third baseman, are both solid positional prospects -- but the San Diego system, on the whole, looks much like their major league roster. Lots of pitchers, awfully thin on the bats.

Until the Padres find a way to bring in serious upgrades to their offensive attack, the outlook for the team, I'm afraid, is going to look a lot like what San Diego fans have seen so far. Very few runs, and even fewer wins.