Ryan Ludwick and Albert Pujols are finally starting to make this offense look a little bit like what we expected.

Before the season, most pundits, (and I include myself here) looked at the Cardinals' lineup and said lots of the same things.

They've got a ton of power. The middle of that lineup is going to hit a lot of bombs.

They're really weak around the edges. Outside of the mashers in the middle, it's an uninspiring group.

There's an awful lot of strikeouts in that lineup. This team is going to struggle to put men on base.

Well, through the first month-and-a-half of the season, the Cardinal offense has been a study in absolute topsy turvy results. The power that we all expected, from players like Troy Glaus, Albert Pujols, and Rick Ankiel, hasn't really been there. Most of that, of course, can be attributed to the puzzling lack of homers from Glaus, but even Albert, up until very recently, wasn't putting the ball over the fence like you usually expect him to. He was getting pitched around, of course, but the numbers were still surprisingly low. Ankiel was really the only one of those three who was hitting for power, and he was only doing it in bursts, in between stretches of looking like a Special Olympian at the plate.

On the other hand, the Cardinals' plate discipline has been unbelievably good. They lead the majors in walks, by a comfortable margin, and aren't striking out in nearly the droves you would have predicted from this lineup. Even the more hack-tastic members of the Cards' offense, guys like Ankiel and Ryan Ludwick, have shown at least some plate discipline.

As far as the offense outside of the middle-of-the-order guys, though, that's been fairly accurate. The Cards have received a surprisingly solid performance thus far from Skip Schumaker, who has solidified what was thought to be a huge problem for the team prior to the season, the leadoff spot. Other than that, though, the middle infield has been just as bad as anticipated with the bat, although they, too, have done a better job of drawing walks than I thought they would, and the catcher's position has neither really helped nor harmed the offense with the lumber. 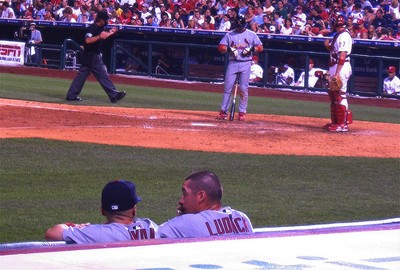 All of a sudden, though, as you look at the team on the morning of the 20th of May, the numbers are starting to look a little more like what we thought we would see. We see Albert sitting there with eleven home runs; Ankiel sitting on seven, (which is maybe a little low) and wonder of wonders, Ryan Ludwick standing at the top, with twelve homers to his credit.

Of course, Troy Glaus's total of two HR's is still glaring, but he's swung the bat much better the past few weeks, and he doesn't seem to lack the power to get the ball out, only the elevation. Even Duncan has chipped in a few of late, though he still doesn't look right at the plate half the time when he's up there.

For most of this season, we've seen the Cardinals put a ton of batters on base, only to lament their inability to drive more home. The culprit has largely been a lack of power. This has been a singles and walks team for most of the year so far, leading to a frustrating number of close losses, often late game losses, in contests the Cards should have just walked away with, based on their number of base runners. The team managed to win solely with pitching and fundamentals the first month, only to see it all go south when the pitching took a predictable step back, and the bullpen collapsed under the weight of too many innings trying to hold on to one inning leads.

Today, though, it doesn't look quite so bad. The Cards look as if they've finally found someone to consistently bat behind Albert in Ludwick. They're still walking, still making opposing pitchers work for every out they get, and the power looks as if it may be on the way. If the balls keep going over the wall the way they are currently, the way most of us thought they would all along, good times are definitely ahead for this team.