On Wednesday afternoon, the Chicago Cubs agreed to a contract with Jim Edmonds.

Hold on a second. Let that soak in.

Jimmy Baseball is going to play for the Cubs.

You know, there was a baseball game last night, and the Cardinals won. And I, frankly, couldn't care any less. Jim Edmonds is going to be a Cub.

Edmonds was my favorite Cardinal. During the recent run of success the Cardinals have enjoyed, Edmonds was always the player I most enjoyed seeing, on the field or behind the microphone. I loved the whole attitude Jimmy brought to the game, the blond highlights and the occasional just-for-effect dive. You could practically set your watch to the guy coming down with some sort of mysterious leg injury in spring training, which would just as mysteriously disappear once the season started.

I liked Edmonds the most, too, because he seemed like he would be the most fun of any of the players to hang out with. Albert is probably the best player I've ever personally seen, but let's face it, he doesn't exactly light up the room when he walks into it. 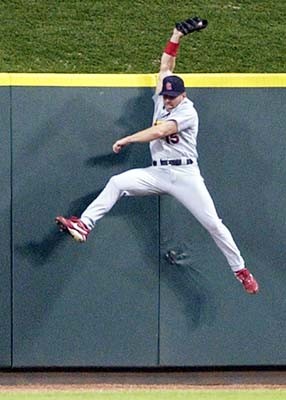 Also, and this is totally my own thing, I never had to listen to Jim go on and on about God whenever he was asked about the game afterward. OK, we get it, right? The Lord has blessed you, that's fantastic. Unless Jesus himself told you that 2-2 pitch was going to be a curve ball, I fail to see how that really relates to the question asked. (By the way, athletes, if Jesus did tell you it was going to be a curve ball, that is a story I'm interested in.)

Jimmy just always seemed like the coolest guy on the team. Just a regular guy, no bullshit. Completely apart from the fact that he was an amazing player, I just loved having the guy around. And now, a Cub.

I wonder what the reaction's going to be like when Edmonds and his new crew come to town now? I had thought that when San Diego came into Busch this year, Edmonds would run out to center field in the bottom of the first, and the stadium would erupt. The fans would stand, the batter would step out, and St. Louis would give Jimmy Baseball one last curtain call for all he did while he was here. Now, I can't imagine that happening. Jimmy Baseball is now Jimmy Cub. Can we possibly give a standing ovation to a Cub, no matter how beloved he may have been? Personally, I don't think I could bring myself to do it. I also worry about the state of Jim's hair. He was always perfectly coifed while he played here, but now how is he going to keep up with it? I have to think it's going to be much harder, now that he can, presumably, no longer see his reflection in a mirror.

I guess I can't really blame Edmonds. The Padres cut him loose, and the Cubs came calling. He isn't quite ready to hang it up yet, and there they were, offering a contract.

Of course, the paper the contract was printed on smelled of sulfur and it was written in blood, but it was still a contract. So he took it. I'm sure other great men have made worse deals before. Still, though, I just can't quite get my head around this one. A Cub.

So What Will Happen to F15teen?

Edmonds' restaurant in downtown St. Louis had a "Show Jimmy Love" event planned for July 17, when Jimmy Baseball was slated to return to St. Louis with the Padres.

As expected, F15teen won't be hosting such a day now that he's with the Cubs. But not for rivalry reasons, but because Cards vs. Cubs tickets are hard to come by.

F15teen general manager John McGuire (a closet Cubs fan, gasp!), says a couple dozen people had signed up for the $115 game-day event and refunds will be issued within the next "seven to ten days."

Edmonds spoke with F15teen management earlier this week and mentioned that he was in the works with the Cubs on a deal.