Yesterday afternoon, right about 3 p.m. St. Louis time, a tremendous explosion was heard in downtown Denver, Colorado. Local officials, fearing the worst, visions of a terrorist attack in their heads, responded to the apparent source of the sound, Coors Field. Upon reaching the stadium, they were shocked to find a smoking, dust-filled crater where the pitcher's mound had previously stood. On further inspection, they found a single Cardinal player at the bottom of the new depression, one Kyle Lohse.

He had been roughed up in his previous outing, against the Cubs, but it was brushed aside as one bad day, particularly since the Cardinals were able to maintain and emerge victorious. This time, though, not so much.

I had actually had plans of writing up a post-game article yesterday, but found myself without a single idea of anything I could actually write about. It was an ugly game, and there aren't really even any positives to take from it, except for the fact that Ryan Ludwick may, in fact, destroy us all with his insane powers. 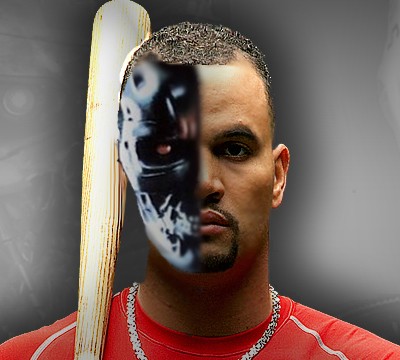 Despite what this clever bit of Photoshopping suggests, Albert Pujols is not a machine. He needs rest, says manager Tony La Russa.
So, I didn't write a post-gamer. Then, I turn on the television this morning, and I see that, apparently, no one else could find anything interesting either, because all of the coverage is of Albert Pujols getting pissed and mouthing off to Tony La Russa when Tony pulled him from the game.

This is a story? Albert needed a day off, probably should have gotten one to begin with. Tony went ahead and played him, and owing to the bullpen's meltdown of the night before, the Cardinals were no longer looking at a possible sweep of the Rockies. Instead, they were trying to salvage a series win. Kyle Lohse went out and laid an egg, the game was a little out of hand, and Tony decided to go ahead and give Albert the rest of the day off. Albert, fuming at the score, and probably still smarting from his own contributions to the previous night's loss, didn't want to leave. Tony told him to grab some pine, and Albert mouthed off. That's it. That's not a story.

These are ridiculously competitive people we're talking about in general, these professional athletes. Never mind that Albert is unusually driven and intense, even by pro athlete standards. Albert wanted to make up for his mistakes. His team was losing, and he does not like to lose. Tony did what was best for the team and sat Albert down. I'm less than shocked that Albert let his frustration boil over a bit. He knew perfectly well what was happening to his team. They had been on their way to winning the first three games of a four-game set, ready to go for the sweep, with a shutout going, in the eighth inning of Wednesday night's game. Less than a full game's worth of innings later, they were looking at a series split, having wasted a gutty performance by their ace and being shut down by a pitcher who brought an ERA in the double digits into the game. You can't blame the guy for being a wee bit upset.

So let's just all agree that Albert showing some frustration when he's taken out of the game really isn't a huge deal, okay? I have a hard time believing that this is going to have long-term repercussions. In fact, I really don't think it even lasted for as long as the plane ride into Milwaukee. Breathe deep, everyone. Albert and Tony are going to be just fine.

What we should be worrying about is the fact that the Cardinals just lost two games in a row, the second when they were facing one of the worst pitchers in all of baseball. Let's worry about the fact that the back end of this rotation looks very, very shaky all of a sudden. Most of all, let's focus on the fact that this team has achieved one of the best records in the game to this point by getting ridiculously good pitching performances, despite the offense struggling to drive home runners.

This team gets on base at a prodigious rate, yet they leave them stranded at a rate that Delta Airlines would be embarrassed by. We're seeing Kyle Lohse, one of the biggest surprises of the season so far, suddenly looking much more like the pitcher he's been the rest of his career, rather than the pitcher we've seen the first month of this year. How many games are the Cardinals going to win if the pitchers suddenly all turn back into pumpkins at the stroke of midnight?

There are plenty of things to be legitimately concerned by right now, folks. Tony La Russa and Albert Pujols getting along is not one of them.

For now, what really needs to be seen is whether or not the Cardinals can put their current bad mojo behind them and beat a Brewers team that has had more than its own share of struggles lately. At least we'll know this: No matter how badly the Cards' pen has struggled lately, they're still light years ahead of the Milwaukee relief corps. There's a bit of solace to be taken from that, though it'll be cold comfort indeed if the Cards fail to take advantage of a team that's down.

All right. Enough cheer from me. I'll see you all later.