I was listening to Kevin Wheeler on KMOX last night on the drive home and caught his conversation with first-year Cardinals general manager John Mozeliak. After some chitchat about the team's early-season run of great play -- and great plays, like Pujols' Monday-night mad dash and Ankiel's phenomenal-cannon heroics on Tuesday -- Wheeler asked Mozeliak to comment on the latest news about Mark Mulder, the oft-injured lefty whose recovery from recent shoulder surgery took a detour yesterday after he was examined by team doctor George Paletta.

I wasn't recording or taking notes -- I was driving -- so I didn't get it down verbatim, but the gist of Mozeliak's response was this: The decision to sideline Mulder for at least a week owing to what was described as a mild strain of the rotator cuff was the right thing to do for the team and, Mozeliak stressed several times, for Mulder.
mlb.com 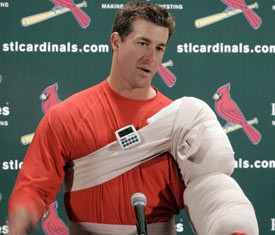 I was struck by those remarks because I'd read a story in the St. Louis Post-Dispatch earlier in the week about Mulder's last rehab start on Monday, in which he pitched six crappy innings for the Triple A Memphis Redbirds. That story was labeled a "special to the Post-Dispatch" and was written by Jim Masilak, the daily Memphis Commerical Appeal's beat reporter for the Cards top farm team.

Masilak (yes, that's Masilak, not to be confused with Mozeliak) noted that while the Redbirds had held the opposing Colorado Springs Sky Sox to an aggregate eight runs over the previous three games, Mulder was socked for seven runs in six innings. In his previous start last Wednesday, Mulder had done even worse, giving up nine runs and failing to last four innings.

Mozeliak was in Memphis to watch Monday night's game in person. Masilak characterized the Cards GM as "decidedly unimpressed" with Mulder, who's attempting to come back after undergoing surgery last September to repair his left labrum and rotator cuff.

Masilak quotes Mozeliak as saying about the outing, "...I feel that at times [Mulder's pitching] lacked effort -- or intensity may be the right word," Mozeliak said. "There's still some work to be done." The story ends with this from Masilak:

"Underwhelmed by what he saw Monday, Mozeliak will be looking for something else [in Mulder's next outing].

Why would this disturb me? Well, Cardinals' management does not have a good track record in recent years when it comes to dealing with injured and rehabbing players. Scott Rolen pops to mind; the souring of the All-Star's relationship with manager Tony La Russa was brought on in large part by the manner in which the ballclub dealt with the diagnosis and treatment of the third baseman's ailing shoulder. I've cringed at the thought of being in Rolen's place, or that of closer Jason Isringhausen -- who preserved his good rapport with La Russa and pitching coach Dave Duncan despite playing through tremendous pain before undergoing hip surgery -- as the team and its medical brain trust gambled with my long-term health.

Of course, there has always been, and probably always will be, a built-in tension that goes along with an athlete playing through pain. How much pain is "normal"? What risks does a player take if he discloses to his bosses that he's in pain? How long till he's branded a complainer, or worse?

If you want to refresh your memory regarding Mulder's downward trajectory and the way Cards management dealt with it, this 2006 post from Larry Borowsky at his blog Viva El Birdos, provides a handy one-stop shop.

Mozeliak is in his first season as GM, filling the position that for the past decade had been occupied by Walt Jocketty, who's now with Cincinnati. For a time, Jocketty, who was fired after last season, was hailed as a genius for his trading prowess. But praise turned to skepticism, skepticism to doubt and doubt to disdain as Jocketty's bartered ballplayers -- Mark McGwire, Rolen, Jim Edmonds calcified, and the prospects he traded away -- pitcher Danny Haren perhaps foremost among them -- achieved stardom wearing other teams' colors.

(Haren, traded by the Cardinals to the Oakland A's after the 2004 campaign in exchange for (wait for it...) Mark Mulder, pitched his way to the top of the A's rotation, then was dealt to the Arizona Diamondbacks this past winter. So far this year he's 4-1 with a 3.12 ERA in seven starts.)

Mozeliak, though a protégé of Jocketty, has been cementing a reputation as a champion of younger players and a savvy manager of the scouting, draft and farm systems. (It's widely believed that starting pitcher Anthony Reyes, at many times openly disdained by La Russa and Duncan, made the opening-day roster over the objections of those two and at the insistence of Mozeliak.)

As far as the Cardinals and their fans are concerned, that's all to the good. But if you ask me, it doesn't change the fact that Mark Mulder has been dealt a bad hand. (Some sounded the death knell a long time ago) -- and that the last thing he needs is having his boss carping about his "intensity."