RFT Softball: If Only Pujols Was Free on Monday Nights…

While the hometown heroes the St. Louis Cardinals opened their 162-game season weeks ago, last night a slightly lesser-known local squad took the field for the first time all year. And to Unreal, "local" means that the players sit in adjacent cubicles. That's right, yesterday was opening day for the RFT's slow-pitch softball team. 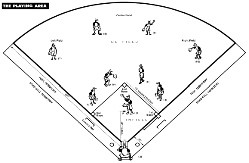 But while the Redbirds were able to dispatch the defending National League champs last night thanks to some heads-up hustle from their MVP slugger, the RFTers were not so fortunate, falling to U. City rec league titans BS Bar by a score that was tallied at "At least 16-0." The box score reveals the impressive magnitude of the defeat, as BS Bar led in such categories as home runs, hits, fielding percentage, total bases, and, perhaps most frustrating for the alt-weekly lineup fresh off a Cinco de Drinko bender, alcohol consumed. After watching the game, a representative from Chico's Bail Bonds immediately offered to sponsor the RFT squad.

The award for player of the game goes to staff writer/pitcher Chad Garrison, who, flush with confidence after conquering the St. Louis real estate market, struck out three while walking just one in four innings of work. While his ERA is inflated after allowing sixteen runs, including an emblematic home run on the first pitch of the season, the blogosphere is already touting his low WHIP and xFIP numbers as more telling of his abilities. If you're in a deep fantasy league, he could be a good waiver pickup.

Check back every Tuesday this summer to see if the RFT will be able to improve on its opening-day showing. Next week's goal: advancing a runner past first base.