President George Bush spoke in Maryland Heights today, touting the imminent economic stimulus package intended to bolster a flagging economy and raise hopes of the impoverished or recently laid off. 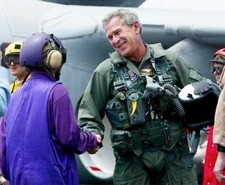 Let's hear it one more time for President Bush's tax-stimulus package!
Basically, taxpaying citizens who make more than $3,000 in taxable income (that includes Social Security and Veterans Affairs benefits) each year are gonna get a minimum of $300.

After you receive your check from Uncle Sam, you're supposed to go buck wild at the mall or any other commercial establishment. If you pay off your bills with the money or save it -- arguably the "responsible" things to do -- you're not really stimulating the economy.

If you're like most of us, you may already have that money spent. If not, after the jump we suggest some tax-stimulus expenditures for those in doubt.

- The credit-card bill for the shit you already purchased while assuring yourself that your tax-stimulus check would be in the mail next month.

- Shotgun and portable generator for near-future collapse of U.S. society.

- Financial adviser who can explain how sending out a couple hundred billion dollars in checks when we're already staring up from the bottom of a debt sinkhole is not going to bite us in the ass this time next year.

Got a suggestion? Post it in the comments section and we'll add it.