I haven't peeked at Seely's picks yet, because I have struggled to come up with my own. I am, however, certain that Seely did not pick the morning-line favorite, Big Brown.

I know this because Seely assiduously avoids playing favorites.

If you're in search for another reason to look elsewhere for a Derby play, I recommend this blog:

Beyond that most excellent title, Fran Jurga offers a bottom-up perspective on Thoroughbred racing. And I do mean bottom up. Here's a link to Jurga's posts about Big Brown, posts that are informatively written and that feature photos like this one (after the jump): 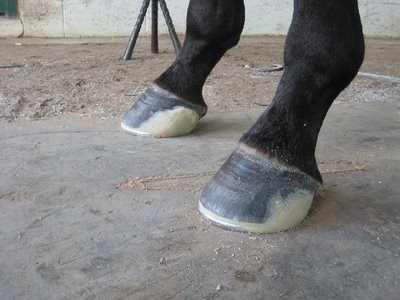 Those, my friends, are Big Brown's much-discussed feet. And here is a sample of what Jurga has to say about said clodhoppers:

Racing fans, rejoice! I have finally obtained actual close-up photos of the feet of Kentucky Derby favorite Big Brown. The following photos were taken on or about April 11, 2008, when the horse's feet were re-glued and re-shod by farrier and hoof repair expert Tom Curl of Vero Beach, who has been working on the colt since he shipped to Florida this winter.

I know there has been some confusion and misinformation in the press so to clarify: the colt was originally worked on by Ian McKinlay in New York, and the horse benefited from his new Yasha shoe technology and heel resection technique. Ian has been supplying photos and videos of the technique and system. But the horse subsequently was worked on by Tom Curl, an associate of Ian's. Tom did the work on the second foot.

What you see is a collaborative effort of two experts using a new technology that has been helping a lot of horses over the past few months.

Like (I suspect) Seely, I'm not going to invest in Big Brown, except perhaps as a "saver" -- i.e., to account for the possibility that the horse should finish first or second, ahead of or behind the horse I finally settle on. But my knock on Brown has little to do with his feet, and far more to do with his actual chances of winning -- and the distance between those chances and the odds he's likely to go off at.