The end of season three of MTV reality show Rob and Big left loyal fans asking a lot of questions.

What happened to the mini-horse?

Who was going to keep Meaty?

Will Rob and Big ever be back together on screen? 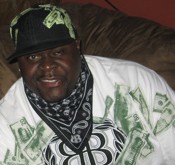 Chris ''Big Black'' Boykin, Saturday at Club Buca
I got the chance to get all the answers to those questions of Big Black Saturday night, during his stop at Club Buca on a promotional tour.

Big Black is on a Southern tour to, in his words, ''give back to his core fans.''

After St. Louis, Big headed to Atlanta, New Orleans, among other southern cities, where his fans met him in person. But what about the rest of us who didn't meet reality show cast member?

Big will be back on MTV this summer with reruns of the third season of Rob and Big, the MTV show featuring Big Black and his friend, pro skateboarder Rob Dyrdek.

So will there be a fourth season of Rob and Big? That would be a no. According to Big, Dyrdek has not been able to skate as much since hitting a reality show gold mine in 2005 with their MTV show. Dyrdek is pretty much burnt out with reality television. He will be returning to the sport that first made him popular.

And will Big be back on television? Yes, Big will be returning to reality TV-land in November with a show featuring his friends. It will be about his life and career, as he builds on his ''BB'' clothing line. No word on if Rob will be making a guest appearance. It will not be on MTV though, ''they are too cheap,'' so look for him to be on Showtime, G4 or Spike TV.

So much for the human cast of the show, so what about mini-horse and meaty?

Will mini-horse will be returning to a stable where he can be with other horses?

The boys gave him to the lady who has been training the animal since Season Two. And Meaty will be staying with Rob, but that's OK, Big gets to keep Meaty's sister.

Yes, Meaty had a sister that was never featured on the show but maybe we will get to know her when Big Black returns to TV in November.