Star Clipper celebrated its twentieth anniversary Friday with some serious style; they are hosting the the ''St. Louis Munny Show'' through May 30. For those of you unaware of what a Munny is, it is a do-it-yourself toy that gives the artist freedom to design its appearance. Cute or even viciously cute, the vinyl creatures are insanely popular.

Although the well-crafted, bizarrely adorable Munnys were the center of attention, good ol' Star Clipper had more going on. 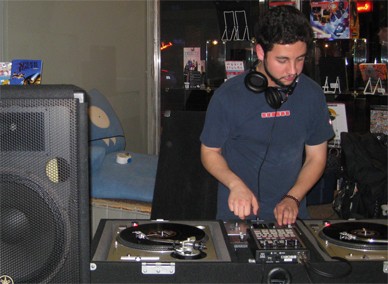 DJ Mahf spinning records in a comic book store.
DJ Mahf stopped by providing a killer soundtrack to the evening and Schlafly provided the refreshments. Remember this people: there is always booze at a gallery opening or a decent art show, so go to them. There is also some fantastic art, but you have to have your priorities.

I got a chance to talk with a few of the artists; it was nice to delve into the method that was their Munny madness.

Larry Spaulding, a self-described mercenary artist, works mostly in clay and some found art, said, ''You got the Munny; I got your honey.'' I like it, but I'm not entirely sure what that means.

Jamie Wood, an art student at the Meramec campus of St. Louis Community College, said she tried something new with her Munny ''Monger,'' by using a simpler color scheme.

Anchovy Sciarrino with ''Rad Cyclops.''
Anchovy Sciarrino almost gave up on ''Rad Cyclops'' after he smudged the head because the paint wasn't dry. So, he laid down on the couch and debated whether to pick back up the giant eye and finish the Munny. Can't say I blame him for considering quitting. If you screw something up so close to the finish line, well, might as well light it on fire. But, thankfully, he finished, and ''Rad Cyclops'' was one of the show's favorites.

Star Clipper was packed from start to finish. You know, it's nice seeing so many come out to support local art; gives me a warm tingly feeling. I know there is a beer joke there, but screw it, you think of one. The groups of people mingled and the conversations moved from Munnys to just about anything else.

Once the hour struck nine, it turned into less of a Munny show and more of a well-executed party. Maybe more of a pre-party, Star Clipper closed up at ten. Somewhere during the show I think I saw a guy in a chicken costume, no joke; I also saw the Speed Racer trailer about 70 times. At first glance I didn't really want to see the movie, but after thirty or so times I became sort of interested. Apart from the Speed Racer insanity, it was a damn good time. And, as an added bonus, I don't think anyone puked on comics.