On Thursday afternoon, the Cardinals played the finale of a three game series against the Brewers. I was lucky enough to score some free tickets, and, being the intrepid reporter that I am, I'm taking it upon myself to record my thoughts on the game. Come along with me, your eyes and ears to the world of Cardinal baseball.

Bottom 1st - Well, I missed the top of the first, but it must have been OK, because there are still all zeroes on the scoreboard. Two men on. Need to get at least one of them home. Troy Glaus sucks.

Top 2nd - So far, so good. Lohse is looking solid. Also, I'm not sure what kind of vegetarian Prince Fielder became, but I would lay money it's the type that still eats lots and lots of bacon. I've seen shut-ins in better shape than this guy. 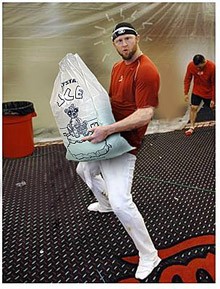 Chris Duncan.
Bottom 2nd - Ryan Ludwick is a beast. This team has got to try and move Chris ''The Humpty Dance'' Duncan for some pitching prospects or a real shortstop or something. We have way too many good outfielders. Duncan's a nice hitter, but I'm tired of watching Baby Huey lumbering around out there.

Also, I wish they would fix the scoreboard. It's been two balls and two strikes, no outs, since I got here. We don't have any ball/strike data, batting average, or hitters' most romantic evening stories. Baseball just isn't the same without the dumbing down.

Top 4th - I know he has the devil as his agent and all, but seriously, how in the hell was Kyle Lohse still available in the middle of March? I just don't understand how that happens.

Bottom 4th - He's a one man wrecking machine! Kyle has no intentions of losing this game. ''Fine. If you guys can't score some Goddamned runs, I'll do it myself.'' Bottom 5th - Cards are leaving an awful lot of runners on base today. I don't like this at all. It feels like one of those games where you just let the opponent hang on and never quite put them away.

Finish them! For the love of God, do it now!

Also, apparently this salty pretzel and no beverage wasn't the best idea here in this sun drenched hell where I'm currently sitting. Who would have thought that bread and salt wouldn't quench my thirst?

Top 7th - Astros lose. Very nice. The Cubs are getting their asses handed to them. Even better. I fear the Reds, though. They're finally starting to put together some really solid pitching. No es bueno.

I don't get it. Why does LaRussa insist on substituting Skip Schumaker for Crab Man (Barton) late in the game? Repeat after me, Tony: ''Brian Barton is a good fielder. He really is. He can even throw a little bit. Promise. For serious.''

Is it weird that I never sing ''Take Me Out To the Ballgame'' because I feel like my voice always stands out above the people around me, but I also feel really guilty for not singing? I'm not sure why I feel as if I've done something wrong, but I always secretly think I'm letting the team down by not singing.

Top 8th - Well, this certainly does suck. Shutout gone, man on second, nobody out, Franklin into the game.

Schafer: Troy Glaus is Uncle Rico
Franklin hits Weeks. Really Frankie? Dude, if you're going to hit the guy, at least make it worth your while. Inflict some pain, man. Double switch for Glaus, also? Look, I love Uncle Rico as much as the next guy, but you lost me somewhere, Tony.

Flores in. Pretty sure he and Lohse were separated at birth. There should have been three pitching Flores brothers. They could have traveled through the southwest, setting up a tent in every town.

''Come one, come all! See the amazing throwing Flores brothers! Marvel at their identical, horribly misshapen goatees! Nature's cruelest mistake! See the slider that just refuses to break! Witness the miracles of the pitcher signed below market value! Ladies and Gentlemen, this spectacle must be seen to be believed! Not for the faint of hear!''

Damn. Skip should have had that ball; he just sort of drifted toward it with his glove up, then all of a sudden seemed to realize it was going to fall in and turned on the jets, but by then it was too late. Tied game. Couldn't put them away, could you guys? I hate being right. Apparently, Fielder didn't take too kindly to my mocking his girth. I would apologize to him, but I'm a little afraid he may try to devour me in lieu of a steak. He's got Beef Fever, I tell you!

Bottom 9th - All right, guys. I've had enough. I'm already painfully sunburned; how's about we just get this over with and go home, huh? What do you say?

That's what I was afraid of. Let's see, men left in scoring position in the 8th and the 9th. It's like double coupon days. Except instead of coupons, it's men left on base. Fantastic.

By my count, I think that's about nine or ten left on base this game. That really hurts. Top 10th - Bad throw by Izturis there. Braun's a good runner, but still. A good throw gets him.

Our middle infield just in general is a black hole.

Why Thompson here, I wonder? Why not Kid Dynamite Reyes? I was really hoping to see him in this game. Apparently, though, he's only approved for use when all other options are completely exhausted, including helpful street people offering to throw a few.

Fuck. OK, I get it, alright? I'm sorry I made fun of your weight, Prince. Good God, do you really have to rub my face in it like this? Not cool, man.

Brad Thompson, your pitching is bad and you should feel bad. That is all. Down 5-3. This blows.

Nice start for Ludwick! The guy's on fire! Unbelievable!

Nice, Yadi. A Walk's as good as a hit when you need two. Problem, of course, is the batters behind you. Cesar Izturis and his .220 slugging percentage don't exactly put the fear of God into opposing pitchers.

Two down. I will have my revenge.

Uncle Rico, the last hope. He can throw a football over a mountain; can he come up with a game tying, (or even, dare I say it, game-winning?) hit here in the late innings?

Survey says… No. He cannot. General consensus among fans: ''Well, that sucked.'' This team really needs to start scoring some more runs. There's an awful lot of automatic outs in the Cardinal lineup right now, though, and I don't think it looks to turn around quickly.

I have to say, I blame LaRussa in large part for this game today. We saw the dark side of him today; the side that makes a ton of moves and burns through his whole bench by about the seventh inning. No ammo left for the end of the game, despite having the tying runs on base.

Aaron, over and out.